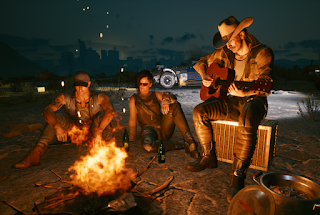 I've been busy with other things, so no new books to review this week.
Posted by Sullivan McPig at 11:58 No comments: 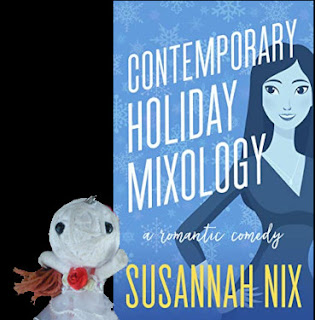 Contemporary Holiday Mixology (Chemistry Lessons #3.5?)
by Susannah Nix
What is it about:
After she’s jilted at a holiday ball, Gen hits it off with a handsome stranger. But what she intends as a casual hookup leaves her inexplicably wanting more. Will she ever find her Prince Charming again, or is he lost to her forever?
This story was originally published in the 2020 Jingle Balls Anthology under a different name, and is only available to subscriber's of the author's newsletter.
What did Voodoo Bride think of it:
The other two books I read in this series were not brilliant, but enjoyable enough.
This one however is absolutely not for me.
Gen meets a guy at a charity event and introduces herself as 'Gen with a G'. So of course the jerk keeps calling her 'Gen-with-a-G' for the rest of the novella. I know it's meant to be witty and/or funny, but stuff like that just seriously pisses me off. So I was totally not into this story and romance, I just hoped Gen would punch the jerk.
I don't think I'll read more by Nix, the previous books were entertaining enough for freebies, but I don't see myself paying for the other books in the series.
Why should you read it:
Maybe you don't mind jerks who think they're witty, but aren't. 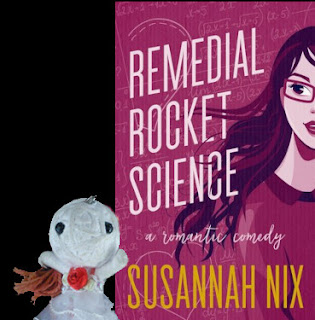 Remedial Rocket Science (Chemistry Lessons #1)
by Susannah Nix
What is it about:
Opposites attract when a computer geek meets billionaire bad boy.
The last thing Melody expects when she accepts a dream job offer is to run into her college one-night stand again. Not only does the hunky blast from her past work at the same aerospace company where she's just started in the IT department, he's the CEO's son.
Jeremy's got a girlfriend and a reputation as a bad boy, so Melody resolves to keep her distance and focus on building a new life for herself in Los Angeles. But despite her good intentions, she can't seem to stay away from the heavenly-smelling paragon of hotness.
As the two begin to forge an unlikely friendship, Melody's attraction to Jeremy grows deeper than she's ready to admit. Can the woman who always plays it safe take a risk on the man who's all wrong for her in all the right ways?
What did Voodoo Bride think of it:
After I read Advanced Physical Chemistry, which is book 3 in this series, I discovered I had book 1 lingering on my kindle app as well.
And I liked this book slightly better than Advanced Physical Chemistry. I liked Melody and didn't dislike Jeremy, even though he's a bit of a douche for part of the story. I actually liked Jeremy's girlfriend the most, to be honest.
Still this is an enjoyable read that even has some fake dating, so I had fun with it. The women in STEM was at least a bit more prominent in this book as well.
I did get the opportunity to download a novella in this series as I receive the author's newsletter, so I decided to give that a try next.
Why should you read it:
It's an enjoyable Contemporary Romance
Buy from Amazon 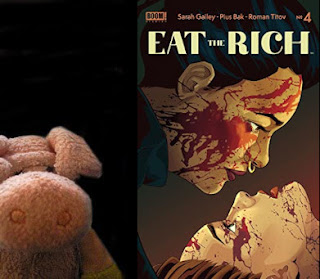 Eat the Rich #4
by Sarah Gailey
What is it about:
Even as Joey struggles to make sense of everything she's seen, what role her beloved Astor has in it, and what it means for her relationship with him, Crestfall Bluffs is a flurry of activity preparing for the Thistleburn Unveiling Gala Party. When Joey intervenes in a situation she doesn't fully understand, it will bring everything to a head in the most unexpected way!
What did I think of it:
Things are getting absurd in this issue.
I liked the start, the story seemed to take a turn I was hoping for, but then things got weird... Maybe it's just me, and others might find it suspenseful or scary, but it felt almost like slapstick to me at times.
Still I'm curious how this all will end, so I'll get my trotters on the last issue for sure.
Why should you read it:
It's a fun horroresque comic
buy from amazon

After rereading Tin Star I immediately reread this short story about Heckleck. It's available as an ebook on amazon, but can also be read for free online.

It is a beautiful story in my opinion, so if you read Tin Star or are a fan of SF, I can recommend you give this a try. 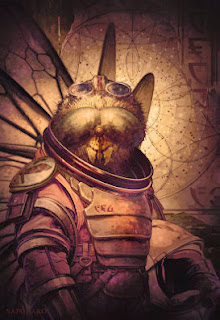 The Sound of Useless Wings
CECIL CASTELLUCCI
illustration by DOMINICK SAPONAROIn this prequel to Tin Star, we meet Heckleck, the Hort alien who befriends Tula Bane on the space station Yertina Feray in her fight for survival. In his modest beginnings, Heckleck is raised to understand that breeding and propagating his own kind is the sole reason for living. When he is called upon to settle on a new planet, he meets the daughter of a politician, Goglu, with whom he falls helplessly in love, and is determined to win over. But nothing is easy in love and space exploration, and when his plans become thwarted, he must find a new way of life.This short story was acquired and edited for Tor.com by Connie Hsu.Read it here
Posted by Sullivan McPig at 13:00 No comments:

I was in the mood for some comfort reads, so I reread this book. Here's a repost of my review + some thoughts on rereading. 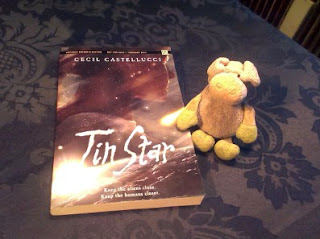 Tin Star (Tin Star #1)
by Cecil Castellucci
What is it about:
On their way to start a new life, Tula and her family travel on the Prairie Rose, a colony ship headed to a planet in the outer reaches of the galaxy. All is going well until the ship makes a stop at a remote space station, the Yertina Feray, and the colonist's leader, Brother Blue, beats Tula within an inch of her life. An alien, Heckleck, saves her and teaches her the ways of life on the space station.
When three humans crash land onto the station, Tula's desire for escape becomes irresistible, and her desire for companionship becomes unavoidable. But just as Tula begins to concoct a plan to get off the space station and kill Brother Blue, everything goes awry, and suddenly romance is the farthest thing from her mind.
What did I think of it:
This is such a great read!
I love that this is a story that actually uses real aliens instead of aliens that are basically the same as humans in appearance. Even better is that Tula ends up being looked at as the alien, being the only human on the space station, and humans being a rare sight for the other aliens. I think this book would have deserved a place on my keeper shelves just for that alone.
Luckily there's lots more good things about this book. It's a really cool and intense read.
I loved the aliens, especially Heckleck, Tula's mentor. Castellucci manages to keep him alien, while still giving him qualities that make you like him and relate to him.
I liked reading about the space station, the aliens living there, and about how Tula adapts to her new life. It's surprising how Castellucci makes you fall in love with the space station and its inhabitants with just a minimum of world building.
Then the humans arrive and Tula has to decide how to deal with that.
Not often I've come across a book where you can understand the aliens better than the humans, but this book is one of them. I didn't trust the humans at all, and felt like warning Tula about them. It made for some intense reading.
Some events I saw coming, but others caught me off guard and left me shocked. The ending (although leaving some things open) was satisfying, but I was so in love with this story and world by then that I was eager for more.
All in all this is a really beautiful and suspenseful Young Adult SciFi, and you can bet I will get my trotters on the sequel once it releases. I will also try another book by Castellucci in the meantime.
Thoughts on rereading:
On my first read Heckleck was my absolute favorite. He still was my favorite on this reread, but Tournour, the chief constable on the station really grew on me in this reread. I missed a lot of subtle things in my first read, because I was focused on other things.
Why should you read it:
It's a YA SciFi with actual aliens!
buy from amazon
Posted by Sullivan McPig at 13:00 No comments:

The Problem with Pugs - Book Review by Voodoo Bride 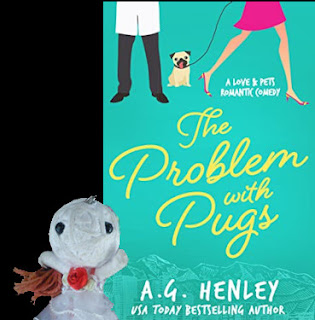 The Problem with Pugs (Love & Pets #1)
by A.G. Henley
What is it about:
New love? Or her pug?
Amelia’s boyfriend Tim broke up with her three months, thirteen days, and eleven hours ago, but at least he left her their baby, Doug the pug. Doug eats her underwear, mutilates furniture, and always poops in the middle of the sidewalk — but he only has eyes for her.
When Amelia reluctantly wades back into the dating pool, meets a new guy, and has to pay his medical bill after Doug launches a sneak attack on him, she realizes she has a problem. She’s determined to do everything she can to help her dog adjust to life without Tim, even recruiting handsome Travis, Doug’s new veterinarian, who’s willing to assist her at risk of life and limb.
But it won’t be so easy. Doug’s the only man in Amelia’s life now... and he isn’t about to share.
What did Voodoo Bride think of it:
After reading the prologue as a short story I was invested in the pug enough to want to give the full book a try.
This turned out to be a nice read. Amelia is pretty hung up on her ex, who's a total jerk, so that annoyed me at times, but not too much. I did love Doug and was rooting for him to get a happily ever after. He's quite the destructive pug, but I could understand where the behavior is coming from.
As a romance it didn't really tick my boxes. I was invested in Doug and side characters, but never got that fluttering feeling I want from a good romance. Still I enjoyed myself with the book and was happy with how it ended.
As I do not have kindle unlimited I don't think I'll get other books in this series, unless they go on sale.
Why should you read it:
It's a fun Contemporary Romance with a pug.
buy from Amazon