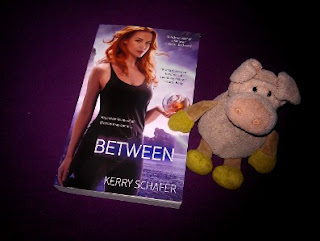 Between (The Between #1)
by Kerry Schafer

What is it about:
Vivian Maylor can’t sleep. Maybe it’s because she just broke up with her boyfriend and moved to a new town, or it could be the stress of her new job at the hospital. But perhaps it’s because her dreams have started to bleed through into her waking hours.

All of her life Vivian has rejected her mother’s insane ramblings about Dreamworlds for concrete science and fact, until an emergency room patient ranting about dragons spontaneously combusts before her eyes—forcing Viv to consider the idea that her visions of mythical beasts might be real.

And when a chance encounter leads her to a man she knows only from her dreams, Vivian finds herself falling into a world that seems strange and familiar all at once—a world where the line between dream and reality is hard to determine, and hard to control…

I will confess I had expected this to be a cool Urban Fantasy read. What I didn't expect was to be taken on a roller coaster ride of emotions. This story frustrated me, made me feel worry, anger and hope. Vivian is a very likable heroine and I couldn't help cheering her on and screaming at her in total frustration at times. The things that happen to her are new and scary for her and I think Schafer did a wonderful job in showing how this affects Vivian.

It might not surprise anyone when I tell you I fell in love with Poe, the penguin Vivian encounters in the Dreamworld. He's a great character and brought a lot of emotion to the story without even being able to speak.

The story itself is really beautiful and intricate. There are lots of things going on that Vivian has to figure out and I was curious to find out where it all would lead. The ending leaves a lot open for the sequel, but not in a frustrating way. instead I was left feeling satisfied for now while looking forward to read book two as soon as it releases.

Why should you read it:
It's a beautiful and emotional Urban Fantasy read.

I loved this book and your review nailed why. Plus, Zee was an awesome hero - in both his forms. =o)

I really need more time to read it too.

@Melliane: you should, it's a great book.

Wow. Sounds amazing with the emotions involved. Thank you! I do want this one.