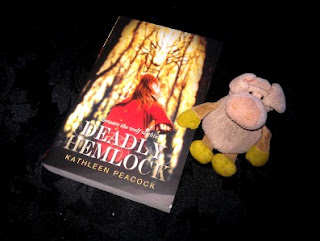 What is it about:
Mackenzie and Amy were best friends. Until Amy was brutally murdered.

Since then, Mac's life has been turned upside down. She is being haunted by Amy in her dreams, and an extremist group called the Trackers has come to Mac's hometown of Hemlock to hunt down Amy's killer:

Lupine syndrome--also known as the werewolf virus--is on the rise across the country. Many of the infected try to hide their symptoms, but bloodlust is not easy to control.

Wanting desperately to put an end to her nightmares, Mac decides to investigate Amy's murder herself. She discovers secrets lurking in the shadows of Hemlock, secrets about Amy's boyfriend, Jason, her good pal Kyle, and especially her late best friend. Mac is thrown into a maelstrom of violence and betrayal that puts her life at risk.

Kathleen Peacock's thrilling novel is the first in the Hemlock trilogy, a spellbinding urban fantasy series filled with provocative questions about prejudice, trust, lies, and love.

I picked this book up on the recommendation of a friend and I am very glad I did, because this is a really great read.

Mac is a likeable character and I rooted for her from the start, even though there were moments I wanted to slap some sense into her. I really liked how Peacock showed how the death of Amy changed Mac and her friends and how each of them copes in another way.

The world building was interesting and the way people treat werewolves was disturbing, especially as it felt really believable. This story sure makes you think about how you would react to having werewolves living among us.

The story was intense and once I started reading it was difficult to put the book down. I wanted to know what would happen next. Some things were pretty easy to figure out, other events took me completely by surprise. The ending is satisfying while at the same time leaving more than enough things open to make me eager for the next book.

All in all this is a gripping read that lingers after you finished it and I will make sure to get my trotters on the next book when it releases.

Why should you read it:
It's an intense Paranormal YA read.

My first thought when seeing the UK title was: isn't all hemlock deadly? So unless UK people know less than this piggy from Groningen I think they know ;-)