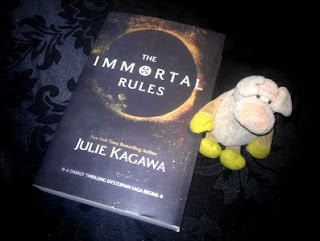 The Immortal Rules (Blood of Eden #1)
by Julie Kagawa

What is it about:
Allison Sekemoto survives in the Fringe, the outermost circle of a walled-in city. By day, she and her crew scavenge for food. By night, any one of them could be eaten. Some days, all that drives Allie is her hatred of them—the vampires who keep humans as blood cattle. Until the night Allie herself dies and becomes one of the monsters.

Forced to flee her city, Allie must pass for human as she joins a ragged group of pilgrims seeking a legend—a place that might have a cure for the disease that killed off most of civilization and created the rabids, the bloodthirsty creatures who threaten human and vampire alike. And soon Allie will have to decide what and who is worth dying for… again.

What did I think of it:
After I read Kagawa's Novella (which is a prequel to this series) in Til The World Ends I was intrigued enough to want to give the Blood of Eden series a try, so I picked up The Immortal Rules.

And it doesn't disappoint.

This is a very cool read. I loved the world building. The vampire city where Allie grew up is a dark and dangerous place, but the world outside of the cities is even more dangerous.

I loved getting to know Allie and her world and I could really understand why Allie hates the vampires. Then the unthinkable happens: Allie becomes a vampire herself!

I really liked to see Allie adapt to her new life and to see her struggle with her conscience. And when she meets up with the pilgrims things gets even more tense.

The story is really cool and full of action. Once I started reading I was hooked and couldn't put the book down. There's intrigue, feuds and secrets that people are killing for and Allie gets caught up in it all.

All in all this is a really cool read that I finished in almost one sitting and you can be sure I will get my trotters on the next book soon.

Why should you read it:
It's a cool Dystopian read with vampires.

It is not calling my name Sullivan, Dystopian is not my genre of choice.

To each his/her own. I myself love Dystopian and Post Apocalyptic settings.

I'm glad you like this series as well, so fun!

I confess that I've stayed away from this one because of "vampire burnout," but your review is making me change my mind. =)