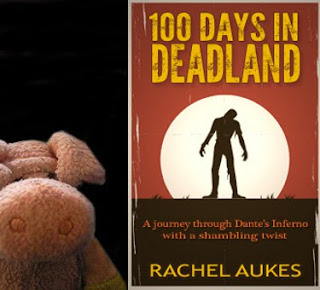 What is it about:
The world ended on a Thursday.

In one day, the world succumbed to a pestilence that decimated the living. In its place rose a new species: vicious, gruesome, wandering monsters with an insatiable hunger for the living. There is no government, no shelter.

Still in her twenties, Cash has watched her friends die, only to walk again. An office worker with few survival skills, she joins up with Clutch, a grizzled Army veteran with PTSD. Together, they flee the city and struggle through the nine circles of hell, with nothing but Clutch’s military experience and Cash’s determination to live. As they fight to survive in the zombie inferno, they quickly discover that nowhere is safe from the undead… or the living.

This is the beginning after the end.

(100 Days in Deadland is a modern remake of Dante's Inferno, the classic tale on the horrors of hell... zombie apocalypse style!)

What did I think of it:
I love zombie retellings of classics, so this modern zombie remake of Dante's Inferno was right up my alley.

And it's so good!

There's lots of cool zombie action, an intense story and characters you can really love.

Even though this book is filled with (subtle) references to Dante's Inferno I will confess that I didn't really take note of them, because the story is so good I was totally engrossed in it. Cash and Clutch are both awesome characters and I rooted for them to survive the ruthless zombie attacks and the even more vile attempts of other people to take away what little they have.

The story follows the descend into hell and with each new circle a new emotion gets introduced to the story. It makes for really intense reading as the sins and emotions that get thrown into the mix are getting gradually worse. There are some really gruesome scenes in this book and they fit the intensity of the story in my opinion. I kept cheering Cash and Clutch on, even as things seemed to go from bad to worse. At times Aukes gave Cash and Clutch some much needed reprieve from their trials and I rejoiced with them whenever things went well for them.

I can't give away too much about the ending without being too spoilery, but I can tell you I'm already looking forward to the next book in this series, because I need more!!

All in all this is a totally awesome post apocalyptic read that I can advice to anyone who loves a good zombie story. That it's a remake of Dante's Inferno is a bonus, but believe me: you don't need to have read it to enjoy and love this book.

Why should you read it:
It's an awesome Post Apocalyptic read with lots of zombies.

So glad you enjoyed 100 Days in Deadland!!! And thanks so much for taking the time to share your thoughts!

I really, really don't want to read this, but I am glad you enjoyed it so much.