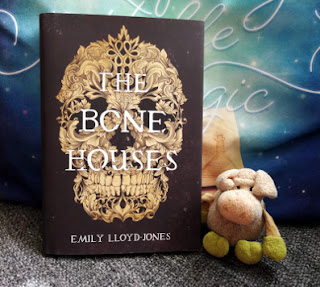 The Bone Houses
by Emily Lloyd-Jones

What is it about:
Seventeen-year-old Aderyn ("Ryn") only cares about two things: her family, and her family's graveyard. And right now, both are in dire straits. Since the death of their parents, Ryn and her siblings have been scraping together a meager existence as gravediggers in the remote village of Colbren, which sits at the foot of a harsh and deadly mountain range that was once home to the fae. The problem with being a gravedigger in Colbren, though, is that the dead don't always stay dead.

The risen corpses are known as "bone houses," and legend says that they're the result of a decades-old curse. When Ellis, an apprentice mapmaker with a mysterious past, arrives in town, the bone houses attack with new ferocity. What is it that draws them near? And more importantly, how can they be stopped for good?

Together, Ellis and Ryn embark on a journey that will take them deep into the heart of the mountains, where they will have to face both the curse and the long-hidden truths about themselves.

What did I think of it:
Walking corpses and a gravedigger who has to deal with them?! You bet I got my greedy trotters on this book.

And what an awesome read.

The small town of Colbren stands on the edge of a forest where the dead don't rest easy. I loved the worldbuilding and the atmosphere of this book, it clearly has its roots in Irish folklore, but the story is set in a Fantasy world as far as I could tell.

I loved Aderyn and her family, especially her younger sister. I was soon totally engrossed in the story and I was rooting for Aderyn, her family, and Ellis. As Aderyn and Ellis go in search of the source of the restless dead things get really spooky and creepy. Slowly you get more information about what happened to make the dead walk, and why they suddenly turned more aggressive.

All in all a wonderful standalone story that is the perfect read for this time of year. You bet I'm going to investigate what else Lloyd-Jones has written.

Why should you read it:
It's a wonderful spooky read.