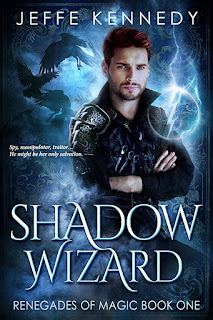 Shadow Wizard: A Dark Fantasy Romance (Renegades of Magic Book 1)
by Jeffe Kennedy
Spy, manipulator, traitor… He might be her only salvation.
Lady Seliah Phel can’t escape feeling like she’s one of those fairytale princesses awakened from a long slumber—except that her life is no romantic story and there’s no happy ending in sight. Though she has her magic and she’s been rescued from the depths of madness that consumed her since adolescence, Selly finds that the years she lost aren’t so easily recovered. Everyone treats her like the child they remember. To prove something—perhaps only to herself—she’s recklessly volunteered to stave off a host of monsters with only the enigmatically alluring, cuttingly sarcastic, and probably deceitful wizard Jadren El-Adrel for company.
Jadren isn’t the heroic type. In fact, he’s not much of anything. Relentlessly groomed into a shadow of a man by his sadistic mother, he’s the perfect spy and tool, with no real will of his own. When he’s stranded in the wilderness with Seliah Phel, he figures the outcome is immaterial. Live or die, it’s all the same to him. But Seliah is a different story and she isn’t like anyone else. Though he reminds himself she’s basically a child in a woman’s body, he finds it increasingly difficult to resist her artless charms and relentless curiosity.
As their predicament goes from dire to disastrous, Jadren realizes his many failures have jeopardized Selly’s future, perhaps her very life. Far from home and trapped without resources, Selly has only Jadren to rely upon—the one person she can’t possibly trust. There seems no possibility of rescue from their friends and family back home at House Phel, so Jadren and Selly must work together to survive… if they can. 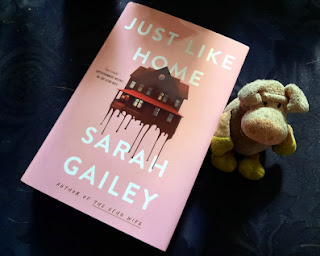 Just Like Home
by Sarah Gailey
What is it about:
“Come home.” Vera’s mother called and Vera obeyed. In spite of their long estrangement, in spite of the memories -- she's come back to the home of a serial killer. Back to face the love she had for her father and the bodies he buried there.
Coming home is hard enough for Vera, and to make things worse, she and her mother aren’t alone. A parasitic artist has moved into the guest house out back, and is slowly stripping Vera’s childhood for spare parts. He insists that he isn’t the one leaving notes around the house in her father’s handwriting… but who else could it possibly be?
There are secrets yet undiscovered in the foundations of the notorious Crowder House. Vera must face them, and find out for herself just how deep the rot goes.
What did I think of it:
I'm a huge fan of Sarah Gailey, so you bet I got my trotters on this book asap.
And this is yet another amazing read.
It is soon clear disturbing things happened in Vera's childhood home, and that these things had an effect on the relationship between Vera and her mother. But how much of the dark mood that hangs over the house is caused by their broken relationship and their past and how much of it is something more sinister?
I was invested from the start, trying to figure out what was going on and what happened during Vera's childhood. The story switched back and forth in time, slowly revealing more about the past and about Vera, her father, and her mother.
The mood is deliciously creepy, and fits the story perfectly. Near the end things get more dark and weird, and I loved it! This book is very different from the other novels by Gailey, although at times it does have similar creepy vibes as the comic Eat the Rich.
You bet this is going on my keeper shelves, and that I'll continue to buy Gailey's books.
Why should you read it:
It's creepy and atmospheric
Posted by Sullivan McPig at 13:00 No comments: 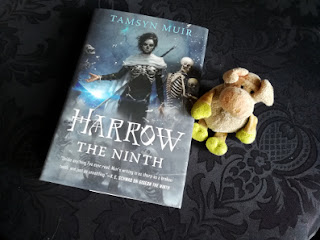 The vacuum of space outside yielded no thanergy and generated no thalergy, but it didn't matter. You no longer needed either.

(page 27, Harrow the Ninth by Tamsyn Muir)
---------
Teaser Tuesdays is a weekly bookish meme, previously hosted by MizB of Should Be Reading. Anyone can play along! Just do the following: - Grab your current read - Open to a random page - Share two (2) “teaser” sentences from somewhere on that page BE CAREFUL NOT TO INCLUDE SPOILERS! (make sure that what you share doesn’t give too much away! You don’t want to ruin the book for others!) - Share the title & author, too, so that other TT participants can add the book to their  TBR Lists if they like your teasers! 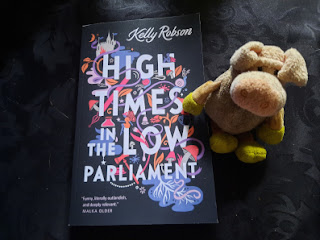 High Times in the Low Parliament
by Kelly Robson
What is it about:
Kelly Robson is back with fairies, scribes, and many many kisses in High Times in the Low Parliament.
Lana Baker is Aldgate’s finest scribe, with a sharp pen and an even sharper wit. Gregarious, charming, and ever so eager to please, she agrees to deliver a message for another lovely scribe in exchange for kisses and ends up getting sent to Low Parliament by a temperamental fairy as a result.
As Lana transcribes the endless circular arguments of Parliament, the debates grow tenser and more desperate. Due to long-standing tradition, a hung vote will cause Parliament to flood and a return to endless war. Lana must rely on an unlikely pair of comrades—Bugbite, the curmudgeonly fairy, and Eloquentia, the bewitching human deputy—to save humanity (and maybe even woo one or two lucky ladies), come hell or high water.
What did I think of it:
I've loved everything I've read by Robson so far, so you bet I pre-ordered this as soon as I could.
And it's good I did, because this is a really awesome novella!
I immediately fell in love with Lana. She's a happy-go-lucky woman who flirts with every pretty girl she meets. It's this that gets her sent to the Low Parliament, a place that might get flooded soon if the parliament doesn't manage to avoid yet another hung vote.
I loved the quirky worldbuilding, the fairy controlled Low Parliament and the antics Lana gets up to with her new sidekick Bugbite (who I also totally loved!) .
But it's not all quirkiness and antics. There's a reason the parliament keeps ending up disagreeing and Lana will have to be smart to get to the bottom of it and save the Low Parliament. I was intrigued by how Robson managed to weave current politics into this story that is set in an alternate world historical Europe without it smacking you in the face or detracting from the story, and I eagerly read on to discover if Lana would succeed in saving everyone.
I read this in one sitting and you bet I'll reread it in the future.
Why should you read it:
It's a fun, quirky, and though-provoking read.

Well, I didn't expect Barney to understand. She was allergic to magic - or at least pretended to be.

(page 49, Dead Sexy by Tate Hallaway)
---------
Teaser Tuesdays is a weekly bookish meme, previously hosted by MizB of Should Be Reading. Anyone can play along! Just do the following: - Grab your current read - Open to a random page - Share two (2) “teaser” sentences from somewhere on that page BE CAREFUL NOT TO INCLUDE SPOILERS! (make sure that what you share doesn’t give too much away! You don’t want to ruin the book for others!) - Share the title & author, too, so that other TT participants can add the book to their  TBR Lists if they like your teasers!
Posted by Sullivan McPig at 13:00 No comments: 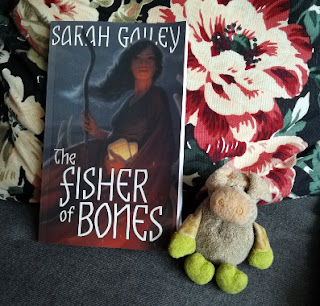 The Fisher of Bones
by Sarah GaileyWhat is it about:The Prophet is dead.

The eyes of the Gods have turned to his daughter. But she isn't ready. Not for the whispers in her ear, for the divinations... for the blood. Her people's history and their future, carved by ancients into the bones of long dead behemoths, are now her burden. Only she can read them, interpret the instructions, and guide them to the Promised Land.

Their journey is almost at an end, but now, without the Prophet, she must find a way to guide them to the place they will call Home. Through blood and through sand, against the will of her own flock, against the horrors that haunt the darkness, only she can bring her people Home.

The Prophet is dead. Long live the Prophetess.What did I think of it:I think it's no secret by now that I'm a bit of a fanpiggy when it comes to Sarah Gailey ever since reading their American Hippo books. I've gotten hold of most of their books by now, and The Fisher of Bones was the last I still needed to get my trotters on. (next: getting hold of all the short stories)And this is such an achingly beautiful read.The Fisher of Bones drew me in, made me fall in love, and then stomped on my heart and feasted on my tears!The atmosphere and mood in this story are beautiful. I was totally rooting for Fisher (the Prophetess) to succeed in leading her people to the Promised Land foretold in the bones only she can read. She has to deal with the doubters, the fanatics, the greedy, and with her own doubts and insecurities. I read this story in one sitting as I just couldn't put it down (Ok, it's a short read, but I'd have done the same had it been longer).All in all this is an amazing read, and I'll be rereading it for sure!Why should you read it:It's a beautiful and emotional read.buy from amazon
Posted by Sullivan McPig at 13:00 No comments:

On McPig's Radar - The Scourge Between Stars

I totally preordered this as soon as it was possible! 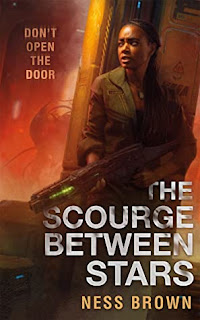 The Scourge Between Stars
by Ness Brown
Ness Brown's The Scourge Between Stars is a tense, claustrophobic sci-fi/horror blend in the vein of Alien and Event Horizon.
As acting captain of the starship Calypso, Jacklyn Albright is responsible for keeping the last of humanity alive as they limp back to Earth from their forebears’ failed colony on a distant planet.
Faced with constant threats of starvation and destruction in the treacherous minefield of interstellar space, Jacklyn's crew has reached their breaking point. As unrest begins to spread throughout the ship’s Wards, a new threat emerges, picking off crew members in grim, bloody fashion.
Jacklyn and her team must hunt down the ship’s unknown intruder if they have any hope of making it back to their solar system alive.
Expected publication: April 4th 2023