Voodoo Bride and I watched two movies yesterday and today we're going to review them both.
First: Enchanted 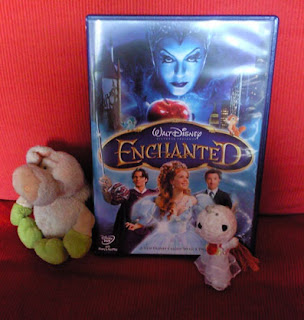 What's it about:
It starts out as a disney animated movie where Giselle, a sweet young woman who talks with animals meets a prince who falls in love with her. His wicked Stepmother doesn't want them to marry so she arranges for Giselle to end up in modern day Manhattan and from there on the movie turns from animated to a normal movie.
What did I think:
Sugary Disney rubbage....
What did Voodoo Bride think:
A romantic movie that is not taking itself too seriously which makes it the perfect movie to watch if you want to be entertained and be sure of a happy ending for all but the bad guys.
Why should you watch it:
When you're in the mood for something light, funny, romantic and not too thought provoking, this is your movie!
Next up was:
The Addams Family Values 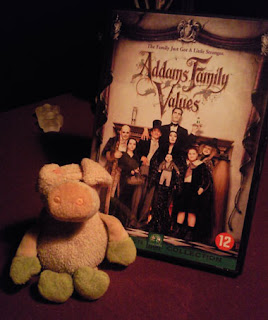 What is it about:
There's a new addition to the Addams family, Fester gets married and Wednesday and Pugsley go to summer camp.

What did I think:
This movie is even better then the first and has everything I want from a movie (except Zombies). The scenes at the summer camp are brilliant and I will never be able to see 'The Sound of Music' again without thinking of Wednesday smiling.

What did Voodoo Bride think:
She's still crying as it reminded her of her weddingday.

Why should you watch it:
If you like the Addams Family and don't mind that the movie had different actors then the tv series and if you like dark comedy, this is your movie.
Posted by Sullivan McPig at 21:21 1 comment: 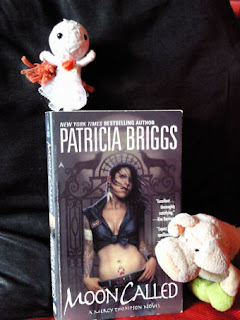 Todays review is about 'Moon Called' by Patricia Briggs.
What is it about:
Mercy Thompson is a Volkswagen mechanic and a 'walker', which means she can turn herself into a coyote. Allthough she lives close to the leader of a werewolf pack and is friends with a fairy, she tries to stay out of supernatural politics. But then one day a young werewolf knock on her door for help and trouble begins...
Why do me and Voodoo Bride think it's good:
Moon Called is a suspenseful, action packed book. Briggs really read up on wolf behaviour which makes her werewolfs the best I've come across in supernatural stories sofar. Mercy is a strong character who doesn't need a man to save her without becoming an over the top indestructable bitch; she's actually human and therefor far from perfect.
Why should you read this book:
If you like werewolfs this is the book for you. Don't expect this book to be a supernatural romance or you'll be disappointed, there's some romance, but luckily Briggs chose to keep it in the background to give the story more room.
If you've read this book and liked it, there's more books in this series:
Blood Bound (with lots of vampires)
Iron Kissed (lots of fairy stuff)
Bone Crossed (vampires again)
And more to come...
Or you could try the Alpha and Omega series by Patricia Briggs.
A werewolf series which starts with the short story 'Alpha and Omega' which is in the anthology 'On the Prowl'. It's followed by 'Cry Wolf' and in august there will be a new book in this series called 'Hunting Grounds'.
Posted by Sullivan McPig at 21:14 1 comment: