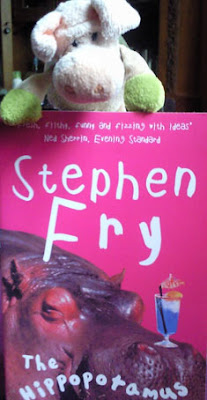 Todays review is about 'The Hippopotamus' written by Stephen Fry, who you may know from things like the Blackadder series, 'Stephen Fry in America' or such movies as 'Wilde' or 'Gosford Park' to name just a few of the many series and movies he starred in.

What is the book about:
It's about Ted Wallace, an old, sour, cantankerous, nasty drama critic who on request of his god-daughter pays a visit to the country mansion of an old friend where miracles seem to be happening and his god-daugther thinks Ted, with his scepticism, is just the right man to discover if what's happening there is the real deal or not.

What do I think about this book:
To be honest, I had problems getting into this story. It's not because it's not well written, because Fry writes excellent. It's not because the story isn't good, because it's a great story. No, it's because Ted Wallace is the nastiest, most awful lead character I've ever come across in books. He is small minded, sexist and unpleasant and I had a hard time at first to see beyond his behaviour to the story behind his rather large ego (hence the hippopotamus). Once I got used to Ted the story was very good, it's got lots of things I love in a story: well written characters, a very good plot and topics that make you think about things not only in the story but outside of it.

Why should you read it:
If you want to like the lead character in a book, don't read this book as I can tell you it's very, very hard to like someone who acts and thinks like Ted. If you however like to read a story that challenges you to think and is also really well written you should try to read 'The Hippopotamus' some time.