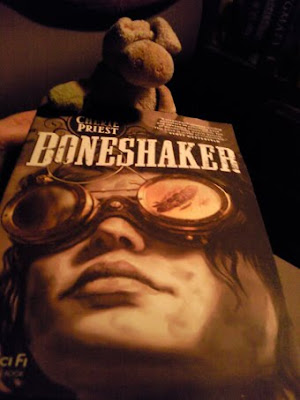 What is it about:
At the start of the Civil War, a Russian mining company commissions a great machine to pave the way from Seattle to Alaska and speed up the gold rush that is beating a path to the frozen north. Inventor Leviticus Blue creates the machine, but on its first test run it malfunctions, decimating Seattle s banking district and uncovering a vein of Blight Gas that turns everyone who breathes it into the living dead. Sixteen years later Briar, Blue s widow, lives in the poor neighborhood outside the wall that s been built around the uninhabitable city. Life is tough with a ruined reputation, but she and her teenage son Ezekiel are surviving until Zeke impetuously decides that he must reclaim his father s name from the clutches of history.

What did I think about it:
This book has it all: steampunk, zombies, pirates and a great story!
If there's one thing I could say against this book is that is doesn't have enough zombies, but as it's something I think of almost every book I read, I can't say it's a real negative point of this book. The book is very well written and I liked Briar from the start. I didn't really like Ezekiel, but because of the great and fastpaced story it never came to a point that not liking him became a problem for me.

Why should you read it:
It has zombies! It's Steampunk! It has pirates!

and pirates too? um, that sounds like the most awesome book ever and i have not even read it yet!