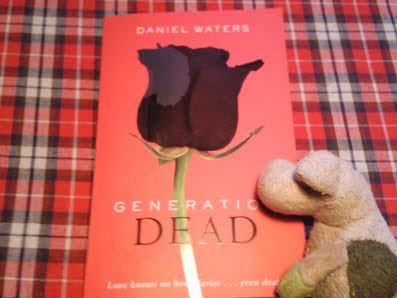 What is it about:
When dead teenagers who have come back to life start showing up at her high school, Phoebe, a goth girl, becomes interested in the phenomenon, and when she starts dating a "living impaired" boy, they encounter prejudice, fear, and hatred.

What did I think about it:
Ok, I don't need my zombies to be brainless, decaying monsters who are out for brains, although that's always an added bonus, but I do want my zombies to actually have a function no one else can take over. When reading 'Generation Dead' however I kept feeling you could replace the zombies easily for any other group of people who have ever been victim of prejudice and/or discrimination.

Apart from that the story is predictable and Phoebe annoying, although I did like it that finally a writer made a Goth the lead character in a book and didn't bash on Goths like so many other writers of supernatural fiction do (which always strikes me as odd as I'm guessing goths are a large part of their audience).

An other thing that annoyed me was that Waters is throwing up storylines that don't reach a conclusion in this book, but most probably will be solved in the next book. Now don't get me wrong: I don't mind if a storyline is divided over more books, but if that's the case I want to have it clear when I buy the book that it's part of a series and nowhere on the outside of this book was that the case.
Somewhere on the inside there's mention of a second book, but not in such a way that you feel like you can't read this book without having to read the second book.

In conclusion: I didn't much like this book and will not be reading the second book.

Why should you read it:
If you don't mind a book with functionless zombies and annoying teenagers you could give this book a try.