Touched by an Alien - Book Review 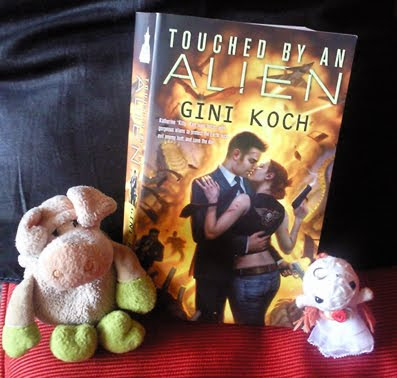 Touched by an Alien - Gini Koch

What is it about:
Marketing manager Katherine "Kitty" Katt joins forces with gorgeous aliens from Alpha Centauri to protect the Earth, kick evil alien butt, and save the day with hairspray and rock and roll - not necessarily in that order.

What did I think of it:
As this is a very girly book I will let Voodoo Bride tell you all about what she thought about it, but I can say the action scenes were cool.

What did Voodoo Bride think of it:
This is a great book! It has witty humor, gorgeous aliens, a heroine I could really relate to and a fast paced story packed with lots of action. The romance part of the story didn't overshadow the main storyline while still adding an extra layer to the story and even though the story is kept light by the humor used throughout the book the plot and action still are exciting enough to keep you on the edge of your seat. Kitty is a strong heroine, but luckily she isn't a macho bitch as so many other strong heroines. Instead she is fun, nice and quirky. All in all a delightfully fun read.

There's going to be a sequel in December and I can tell you that I'm going to make sure to get hold of it.

Why should you read it:
Fans of romantic urban fantasy and science fiction will love this book.

1. When dealing with aliens, what do you think is more likely: the scary, super-smart, totally different species entirely aliens? Or the pretty-much just like humans, easy to relate to, here to save Earth aliens?
I think it's more likely that if there are aliens (and I think that's very likely btw) that they are totally different from us. Maybe even so different that we wouldn't even recognise them as life. But those kind of aliens are very hard to write about and relate to, so for my fiction I like the more human and/or monster kind of aliens.

2. Did you think it was convenient that Kitty's parents were so accepting of the aliens and that they both had "secret" jobs?
Ofcourse it was convenient, but hey! It worked for the story so I don't mind one bit. It's fiction not real life.

4. Which one? Jeff or Christopher? Why?
Jeff!
He's cool, empathic and nice. He's got everything Christopher lacks in my opinion.

Sounds great! I'm excited by this book as I don't think I've ever read any scifi novels, but this one sounds fascinating, so it's on ym TBR pile, heard great things about it. Cool review, thank you! :-)

great review of the book. love the animals by the book.