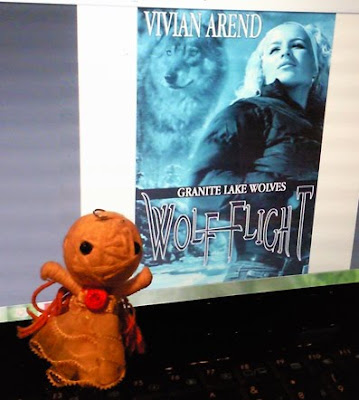 What is it about:
Tad’s workaholism keeps his bush-pilot company in the air, and his inner werewolf in check. Letting it lose would mean compromising his human principles. Then Missy re-enters his life, and their chemistry is off the charts, pushing him closer to the step he’s not sure it’s safe to take.

A wolf pack is a dangerous place to have secrets, and Missy’s corrupt Alpha has sniffed out her carefully hidden Omega powers. Her only choice is to get to Tad, and hope like hell his untapped powers are strong enough to negate her own…

What did Voodoo Bride think of it:
Another great, romantic read. I think I loved this one even more than Wolf Signs. The tension between Missy and Tad is well written and I like how Tad is questioning the wolf side of his nature and is struggling with balancing that side of him with his human side. I also liked how characters from Wolf Signs made an appearance in this story too. Again Arend succeeds in delivering a full, well worked out romance in the space it takes most writers to set up the start of a romance. If you read and liked Wolf Signs this one is a must read.

Why should you read it:
It's got a sensitive, but still manly, hunky werewolf!

And for those who don't like reading e-books:
On August 3 this story will be released in print together with Wolf Signs in the Anthology Under the Northern Lights.
(my review of Wolf Signs can be found here)

ps: Character Connection will be back, but things are slowly getting back to normal after our move.