She Smells The Dead - Giveaway 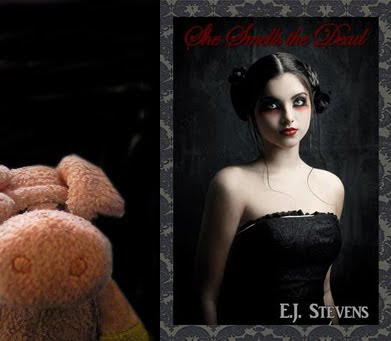 Sometimes you run across a book with such a cool title you want to read it no matter what. 'Victoria: Demon Hunter' was such a book as was 'Abraham Lincoln, Vampire Hunter' and now I found another one:

She Smells The Dead by E.J. Stevens

Isn't that title brilliant?!
And it's not just the title. Just look at that gorgeous cover or better yet, read the cool premise of this book which is the first one in a series:

-----------------
It's the beginning of senior year and Yuki's psychic awareness of ghostly spirits is threatening to ruin her life. Her ability to sense spirits of the dead isn't glamorous like the ghost hunting on television.

SHE SMELLS THE DEAD.

The smell impressions are becoming stronger. Yuki is being visited in her dreams, and she suspects that her friend Calvin is involved in something strange. To make matters worse her crush on Garrett is going unrequited, Yuki's friend Emma is on a rampage against bee oppression, and annoying Calvin Miller mysteriously disappears.

Will Yuki be able to focus her powers in time to save the lost soul who is haunting her? Meanwhile, who will save Yuki from following the spirits into the light?
---------------

If that doesn't make you curious about this book, I don't know what will!

And have I got something awesome for my followers and readers from the US:

E.J. Stevens has offered me a signed copy of She Smells the Dead to giveaway to a US mailing address! (Meaning that international readers can join if they have an address in the US where the book can be send to.)

Some extra rules:
- You don't need to be a follower of this blog. I appreciate people following me, but only if they actually like my blog.
- Leave a comment telling me you want to be entered in the giveaway and leave a way for me to contact you.
- The giveaway will end on October 23th and a winner wll be announced on October 24th.

I'm one of your international followers & I do love bookmarks, so please enter me :)
Thanks for thinking of us, too... That's really sweet :)

I would love to be entered.

This book sounds really interesting! I'd like to be entered.

Hmmm, my first thought was that the smell of decomp is pretty hard to miss but it's still an interesting title for a book. I think I'd read the book just for the cover...I'm such a sucker for a good cover. :)

I have seen this book around the blogosphere and was very intrigued. :) I would love to entered.

Thanks for the opportunity.

I saw this cover recently and thought "how cool is that?!" I would love to win it :)

Oh, that reminds me. Time to close my current contest. Off to Random.org for me.

I would want a chance at winning a bookmark, cause I'm not of the US...
Thanks for thinking about us too, very nice of you.

It's very kind of you to offer something to non-US readers as well, Sully. =) Please enter me in the contest for the bookmark. And thanks so much!

PS--I'm actually more excited about the bookmark. I like your owner's quirky taste and I know she'll pick something great. =)

@Enbrethiliel: Thanks for the compliment :-)

Please, count me in! Thank you.

I'd love to be entered for this book!

Hi McPig :D I just signed up to follow you (thought I already had but wasn't showing so who knows?)
Anyhoo, please toss me crumbling zombie hat into the pot to win & thanks for the nice giveaway!

PS - yes, you would really LOVE House on the Borderland - William Hope Hodgson I think. I promise you'll like it as well as ZOMBEEEEZZZ

I'd love to be entered!
Thanks!

I've been wanting to read this book for a while now. I am a follower