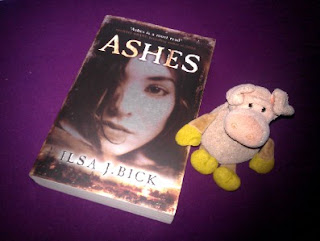 What is it about:
An electromagnetic pulse flashes across the sky, destroying every electronic device, wiping out every computerized system, and killing billions.

Alex hiked into the woods to say good-bye to her dead parents and her personal demons. Now desperate to find out what happened after the pulse crushes her to the ground, Alex meets up with Tom—a young soldier—and Ellie, a girl whose grandfather was killed by the EMP.

For this improvised family and the others who are spared, it’s now a question of who can be trusted and who is no longer human.

Author Ilsa J. Bick crafts a terrifying and thrilling post-apocalyptic novel about a world that could become ours at any moment, where those left standing must learn what it means not just to survive, but to live amidst the devastation.

What did I think of it:
I picked this book up on the recommendation of Merrie Destefano. It was one of the five books she read in 2012 that took her breath away. The Hallowed Ones by Laura Bickle and Enclave by Ann Aguirre were two of the other books on her list and I absolutely love those, so I was hoping that would mean Ashes was at least a cool read.

It turns out to be Post-Apocalyptic Awesomeness!

This book is gritty, grim, disturbing and utterly amazing. I was hooked from the start and had to keep reading to find out what would happen to Alex and the people she meets. Bick doesn't pull punches and the things and situations that Alex encounters are really horrifying and disturbing. I was really impressed by how real what happened felt.

I will confess I had my doubts about some developments (they didn't feel logical), but mostly I was so engrossed in the story I didn't mind the small inconsistencies.

When I finished this book it left me dazed and in awe.

Ashes will most probably end up on my Top Pearls of 2013. What's left to do is buy more books by Bick asap and checking out the last two books on Merrie Destefano's list.

Why should you read it:
It's Post-Apocalyptic Awesomeness

Probably too dark for me, but I'm glad you loved it!

Great review Sullivan, so glad you loved. Not for me though.

I really enjoyed it, too ... and especially LOVED The Hallowed Ones, also Enclave (Outpost was terrific as well)(are we seeing a pattern here? lol)

I applaud your creepy, I mean EXCELLENT taste in literature ;D

Glad you enjoyed it. My book club read it, and we just finished discussing book 2, Shadows. (Have you read it yet?) I think you liked this one more than I did, but I do like how the author goes all out in describing what happens to Alex.

@Anna: I confess I love a good post apocalyptic setting ;-)
And I'm reading Shadows at the moment. So far I'm loving it.