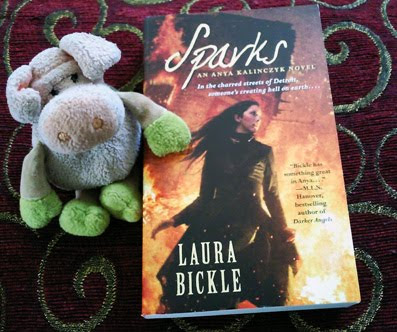 What is it about:
Anya Kalinczyk is the rarest type of psychic medium, a Lantern, who holds down a day job as an arson investigator with the Detroit Fire Department—while working 24/7 to exterminate malicious spirits haunting a city plagued by unemployment and despair. Along with her inseparable salamander familiar, Sparky, Anya has seen, and even survived, all manner of fiery hell—but her newest case sparks suspicions of a bizarre phenomenon that no one but her eccentric team of ghost hunters might believe: spontaneous human combustion.

After fire consumes the home of elderly Jasper Bernard, Anya is stunned to discover his remains—or, more precisely, a lack of them; even the fiercest fires leave some trace of their victims—and she is sure this was no naturally occurring blaze. Soon she’s unearthed a connection to a celebrity psychic who preys on Detroit’s poor, promising miracles for money. But Hope Solomon wants more—she’s collecting spirits, and in a frantic race against time, Anya will face down an evil adversary who threatens her fragile relationship with her lover, her beloved Sparky’s freshly hatched newts, and the wandering souls of the entire city

What did I think of it:
Sparks is the second book in the Anya/Sparky series. I loved the first book Embers, especially because of Anya's familiar Sparky who outshone everyone and everything in my opinion.

That being said: I absolutely love Sparks!
And this time it's quite a bit harder to name one specific thing that outshone the rest I can tell you. Sparky does shine ofcourse (both while guarding his bathtub full of newts and while wreaking havoc on an unsuspecting Baby Super Store) but Anya shines as well in a way she didn't and most probably couldn't in Embers. Where she was emotionally quite closed off in the previous book she's opening up in this one, making her vulnerable in a way that makes you want to hug her and kick some butt among those who pester her. The other characters are very intriguing as well, some raising some questions about who and what they truly are and others making you wish you had them as a friend. The one negative thing I can say is that at the moment it's not clear if there will be more books in this series. I really hope there will be because I want lots and lots more Sparky and Anya!

Why should you read it:
In my honest opinion sofar this book is one of the five books you should read this year.

Great review! Still haven't read Embers, but I have it on my tbr list!

This sounds really good...I haven't heard of this, but I'll add it to my list :)

Thanks so much for taking the time to read it! I'm so glad that you enjoyed. :-)