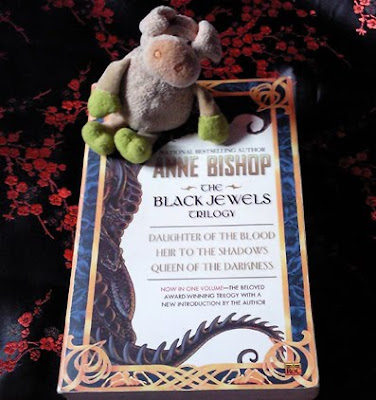 What is it about:
Seven hundred years ago, a Black Widow witch saw an ancient prophecy come to life in her web of dreams and visions. Now the Dark Realm readies itself for the arrival of its Queen, the Witch who will wield more power than even the High Lord of Hell himself. But the Queen is still young, still open to influence - and corruption.
Whoever controls the Queen controls the Darkness. Three men - sworn enemies - know this. And they know the power that hides behind the blue eyes of an innocent young girl. And so begins a ruthless game of politics and intrigue, magic and betrayal, where the weapons are hate and love - and the prize could be terrible beyond imagining

What did I think of it:
This is fantasy at its best! Bishop paints a dark and nasty world and intriguing lead characters who have been tainted by this darkness, but luckily never taken over completely. It does make the characters act ruthless and brutal from time to time, but Bishop writes so well you can understand why her characters act like they do and I couldn't help but cheer them on.
Bishops writing is both pleasant and rich, she succeeds in having me hooked to a story even when explaining history and stuff like that, which in other books usually has me losing interest. One negative thing: When it comes to magic Bishop created a system with jewel ranks and this sometimes confused me and had me turning back to the explanation in the front of the book to figure out what jewel was more powerful.

This trilogy is also available in three separate books: 'Daughter of the Blood', 'Heir to the Shadows' and 'Queen of the Darkness', but I can tell you you will want to have all three books close as the first two end at points that would have left me frustrated if I hadn't been able to read on.

Why should you read it:
Dark Fantasy, superior writing, intriguing, ruthless characters!
What more could you want?

Great review McPig!! I havent read a Fantasy novel in a while! sounds great! =D

I think you'll love this trilogy and best of all: she wrote even more books set in this world.