Hunted by the Others - Book Review 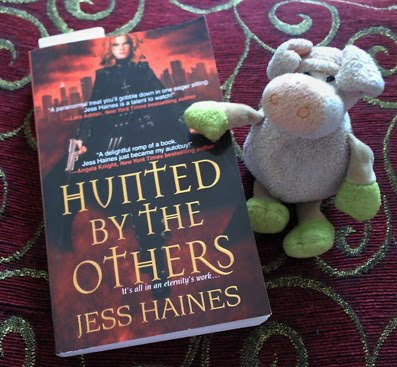 Hunted by the Others by Jess Haines

What is it about:
Shiarra Waynest’s detective work was dangerous enough when her client base was strictly mortal. But ailing finances have forced her to accept a lucrative case that could save her firm—if it doesn’t kill her first. Shiarra has signed on to work for a high-level mage to recover an ancient artifact owned by one of New York’s most powerful vampires.

As soon as Shiarra meets sexy, mesmerizing vamp Alec Royce, she knows her assignment is even more complicated than she thought. With a clandestine anti-Other group trying to recruit her, and magi being eliminated, Shiarra needs back-up and enlists her ex-boyfriend—a werewolf whose non-furry form is disarmingly appealing—and a nerdy mage with surprising talents. But it may not be enough. In a city where the undead roam, magic rules, and even the Others aren’t always what they seem, Shiarra has just become the secret weapon in a battle between good and evil—whether she likes it or not…

What did I think of it:
I love this book. It's well written, has a great, fast-paced storyline and tons of cool characters. I really like the world Haines created, which, even though comparable with lots of other Urban Fantasy worlds, is still unique by small details Haines added to it. Shiarra is a character I can relate to: she has her fears and doubts about herself and the people/creatures around her, but where in some books these fears are often unrealistic or not explained, Haines gives enough background and insight in Shiarra's mind that you share her fears which for me lead to a deeper involvement in the story. Which leads me to the one negative thing I could say about this book: I'm eager for more, but the release of book 2 - Taken by the Others (January 2011)- is much too far away in my opinion!

Why should you read it:
This is a must read to fans of Urban Fantasy

Thanks for the great review Sully! I have this book on my TBr shelf and after all the praise I keep hearing, I'm impatient to read it! :-)

Great review! I have been eyeballing this one for a while, but it sounded too much like all the others. Thanks for the heads up :D

I must confess I myself thought Shiarra would be one of those bitchy heroines like Anita Blake and who I can't stand, but luckily Shiarra turned out to be strong, but flawed and likeable.

Ha! I've got to agree with you about Anita. But I still love that series, mostly for the smut factor *wink*