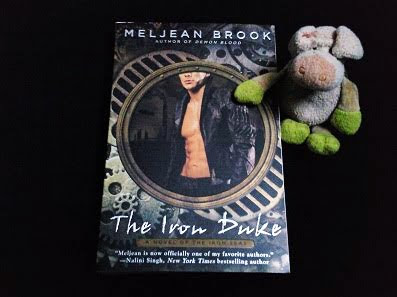 The Iron Duke by Meljean Brook

What is it about:
After the Iron Duke freed England from Horde control, he instantly became a national hero. Now Rhys Trahaearn has built a merchant empire on the power — and fear — of his name. And when a dead body is dropped from an airship onto his doorstep, bringing Detective Inspector Mina Wentworth into his dangerous world, he intends to make her his next possession.

Mina can’t afford his interest, however. Horde blood runs through her veins, and despite the nanotech enhancing her body, she barely scratches out a living in London society. Becoming Rhys’s lover would destroy both her career and her family, yet the investigation prevents her from avoiding him…and the Iron Duke’s ruthless pursuit makes him difficult to resist.

But when Mina uncovers the victim’s identity, she stumbles upon a conspiracy that threatens the lives of everyone in England. To save them, Mina and Rhys must race across zombie-infested wastelands and treacherous oceans — and Mina discovers the danger is not only to her countrymen as she finds herself tempted to give up everything to the Iron Duke.

What did I think about it:
For a story that is promoted on the back of the book with the description 'zombie-infested wastelands' it had very few zombies I must say. Do I hold that against it?

I loved this book! The world Brook created is wonderfully gritty, grim and fascinating. She knows just how to make a world truely Steampunk, instead of it just having a few steampunky details. And it's not just the setting I fell in love with: her characters and the story are amazing as well. The story breathes the same grim and gritty atmosphere as the world where it takes place and even the romance was affected by it, which made it stand out from other romances in my opinion. It did have the over-used 'I love you, but as I'm a macho guy I'm not going to say it or even explain my actions, so you will misunderstand me' moment, but as it was used to keep an action storyline going in the right direction I won't hold that against Brook much.

My final verdict:
Great storytelling and superior worldbuilding. Keep the books coming in this series and I'll be reading them even when there's only a few zombies in them.

Why should you read it:
It's got Steampunk, (Ex)Pirates, Mercenaries and other cool stuff!

This review is entered in vvB32 Reads Iron Seas Challenge
(And I won this book at the same challenge as well :-D )

It sounds great! I'm very interested in Steampunk at the moment and will keep an eye out for this one. Is it part of a series?

It's the first novel in a series, but Brook says all books will also be readable as Stand Alones.
There's also a short story set in the same world in the anthology 'Burning Up' which is awesome in my opinion.
(http://mcpigpearls.blogspot.com/2010/08/here-there-be-monsters-short-story.html)

I loved this one too! Can't wait for the next one.

So happy I got that book on my shelves...just have to find a spare minute to read it. *g*
Great review.