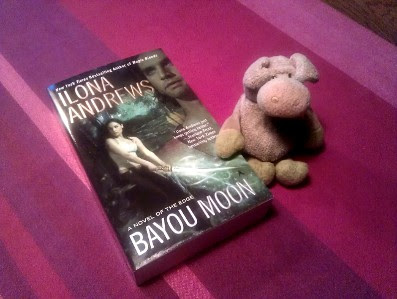 What is it about:
Cerise Mar and her unruly clan are cash poor but land rich, claiming a large swathe of the Mire, the Edge swamplands between the state of Louisiana and the Weird. When her parents vanish, her clan’s long-time rivals are suspect number one.

But all is not as it seems. Two nations of the Weird are waging a cold war fought by feint and espionage, and their conflict is about to spill over into the Edge—and Cerise’s life . William, a changeling soldier who left behind the politics of the Weird, has been forced back into service to track down a rival nation’s spymaster.

When William’s and Cerise’s missions lead them to cross paths, sparks fly—but they’ll have to work together if they want to succeed…and survive.

What did I think of it:
I didn't much like or trust William in On The Edge, the first book in this series, but because I really enjoyed On The Edge and because Bayou Moon sounded like an even cooler story than the first I decided to give it a try.

This story is indeed even cooler than On The Edge!

The world building is really intriguing and awesome. I love the weird, grim world that's created in this book and the mood this world sets for the story. There's lots of weird creatures and monsters and the magic that's used is very original and cool.

I still found William a difficult character, but he was more likeable than in the first book and his difficult character even added to the story. Cerise is one tough cookie, but at least she wasn't as quick to jump to conclusions as the heroine in On The Edge, so I liked her from the start. There were the occasional moments where I wanted to knock their heads together, but all in all I enjoyed the romance between William and Cerise.

All in all I liked this book even more than the first and I'm definitely going to read book three in this series once it's released.

Why should you read it:
It's a very enjoyable PNR in a really cool setting.

I keep hearing I should check this author out but when to find the time! I've got her on my TBR list but damn it's a LONG list.

I have this on my TBR pile as well. I enjoyed On The Edge but just haven't found the time to read this yet! Glad it's worth the read though! :)

Might be needing to add this to my TBR as well! The "Mire, Edge and Weird" caught my attention right off the bat - sounds like some first rate world building in this series :D