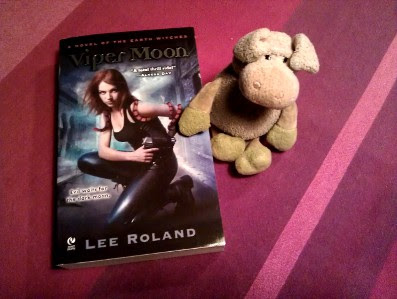 What is it about:
Cassandra Archer is the Huntress. She has faithfully served the Earth Mother for years, rescuing kidnapped children from monsters-both human and supernatural-dwelling in the ruins of the Barrows District. But when two children are kidnapped under similar circumstances, all clues point to a cataclysmic event on the next dark moon. Now Cass must race against the clock and prevent a sacrifice that could destroy the entire town...

What did I think of it:
This was a fun read with lots of cool action and even cooler characters.

The setting and world building are awesome.
The Barrows District is a dark, dangerous place ruled by evil and it is hidden by magic from the normal people. Cassandra is one of the few who go into the Barrows to try and do good. When the sister of a Police Detective and the son of a gangster get kidnapped Cassandra teams up with the two men to find the two teens. They also get help from the charasmatic owner of a gym/spa that's right on the edge of the Barrows.

Next to some cool action, explosions and icky monsters, there's a romantic storyline with a bit of a love triangle going on and I must say I liked the guy on the losing corner or the love triangle the most, but as the other guy was cool as well, I could live with it.

I did get annoyed from time to time by the fact everyone kept dallying at moments I thought they should actually do something. If not for the fact the bad guys needed to wait for the dark moon they could have succeeded ten times over before Cass had even a clue where to find them.

That point of critique aside I really enjoyed this book. It's fun, entertaining and the setting is really cool. I will certainly give the next book in this series a try once it is released.

Why should you read it:
It's a fun story with a great setting.

Great review. :) I have this one on the tbr shelf.

Have a great day.

Thanks! you as well!

Great review! I definitely have to check this one out - thank you for sharing! :)