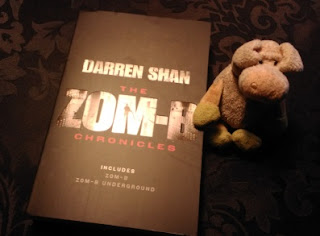 What is it about:
Zom-B is a radical new series about a zombie apocalypse, told in the first person by one of its victims. The series combines classic Shan action with a fiendishly twisting plot and hard-hitting and thought-provoking moral questions dealing with racism, abuse of power and more. This is challenging material, which will captivate existing Shan fans and bring in many new ones.

As Darren says, "It's a big, sprawling, vicious tale...a grisly piece of escapism, and a barbed look at the world in which we live. Each book in the series is short, fast-paced and bloody. A high body-count is guaranteed!"

What did I think of it:
I got a signed copy of book 11 in this series from Beanie, so I decided to try to get the other books of this series as well, so I wouldn't fall into the story at the eleventh hour. I got hold of Zom-B Chronicles I, II and III, which contain the first six books of the series. I'll be reviewing the books that are combined in these chronicles separately.

On to my thoughts on Zom-B!

*spoiler warning*
There is one reveal late in the first book that I knew about before starting on this series. For the ease of talking about this book I will not dance around this reveal.

The lead character of this series is B.
B is not a very nice person. She (yup, that's the big reveal, B being a girl) is rude, a bully, and even though she tells herself she's not a racist like her father, his ideas did rub off on her.

Still I could understand B for a large part. Her father is abusive and a racist. His moods affect B and her mother big time. B knows in her heart he's wrong, but he is her dad. She loves him and wants to please him. This is what makes her do questionable things at times.

Most of this book is a set up for the rest of the series. It's meant to let the reader get to know B and what made her who she is. This book shows how wrong racism and bullying is, and how B struggles with her conflicting emotions on these subjects. It's powerful stuff. It's her struggle that made me like her just a bit in spite of all the nasty things she did. I rooted for her to speak out against her father, and to shake off his conditioning.

And then the zombies appear!

There is some major zombie mayhem near the end of the book. B and other teens have to fight for their survival. I was already hooked on this book, but from this point on I couldn't stop reading until I reached the end.

And the book ends with quite the cliffhanger!

You bet I immediately turned the page to start on Zom-B Underground.

All in all I think I'm going to enjoy this series very much. I will have to get hold of book 7 to 10 soon.

Why should you read it:
It's a really cool zombie read.

Ah - I think it was me that gave you the spoiler about the lead character being female!!!! (eek!!) But terrific that you're enjoying it though!

@Beanie: I didn't mind the spoiler, but it seems that some people were really shocked by it.

Really??? What's so shocking about a female lead character??!

@Beanie: I don't know. Maybe because she's a big bully at first?

@Beanie: I don't know. Maybe because she's a big bully at first?