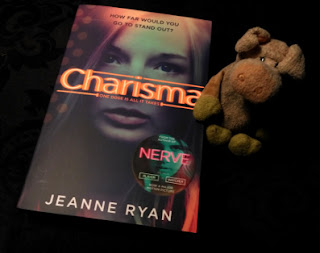 What is it about:
A chance at the ultimate makeover means deadly consequences in this Sarah Dessen-meets-Robin Cook thriller

Aislyn suffers from crippling shyness—that is, until she’s offered a dose of Charisma, an underground gene therapy drug guaranteed to make her shine. The effects are instant. She’s charming, vivacious, and popular. But strangely, so are some other kids she knows. The media goes into a frenzy when the disease turns contagious, and then deadly, and the doctor who gave it to them disappears. Aislyn must find a way to stop it, before it's too late.

What did I think of it:
I very much enjoyed Nerve by Ryan, so decided to give Charisma a try as well.

And this is a nice read.

I didn't like it as much as Nerve, but it was entertaining. I did think the teens in this book were all very stupid, but that seems to be the case with more teens in YA.

I will confess I didn't like Aislyn and the boys she surrounds herself with. It's probably the reason why I thought this story was just nice, and why I wasn't really invested in what was going on.

Still enjoyable enough to finish it, but if this was the first book by Ryan i read, I probably wouldn't have read more.

Why should you read it:
It's a nice YA read.