I Owe You One - Book Review by Voodoo Bride 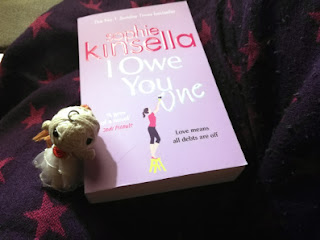 I Owe You One
by Sophie Kinsella

What is it about:
Fixie Farr has always lived by her father’s motto: “Family first.” But since her dad passed away, leaving his charming housewares store in the hands of his wife and children, Fixie spends all her time picking up the slack from her siblings instead of striking out on her own. The way Fixie sees it, if she doesn’t take care of her father’s legacy, who will? It’s simply not in her nature to say no to people.

So when a handsome stranger in a coffee shop asks her to watch his laptop for a moment, Fixie not only agrees—she ends up saving it from certain disaster. Turns out the computer’s owner is an investment manager. To thank Fixie for her quick thinking, Sebastian scribbles an IOU on a coffee sleeve and attaches his business card. But Fixie laughs it off—she’d never actually claim an IOU from a stranger. Would she?

Then Fixie’s childhood crush, Ryan, comes back into her life and his lack of a profession pushes all of Fixie’s buttons. She wants nothing for herself—but she’d love Seb to give Ryan a job. And Seb agrees, until the tables are turned once more and a new series of IOUs between Seb and Fixie—from small favors to life-changing moments—ensues. Soon Fixie, Ms. Fixit for everyone else, is torn between her family and the life she really wants. Does she have the courage to take a stand? Will she finally grab the life, and love, she really wants?

What did Voodoo Bride think of it:
I was in the mood for something light and funny, and in that case you can't go wrong with a Kinsella book.

This book follows the Kinsella method of quirky young woman isn't taken seriously, meets guy, gets in weird situations, figures things out, and everything end well.

As simple as it is, Kinsella does manage to keep coming up with new stories to fit this mold. This one was yet another entertaining, silly, and fun one to add to my growing pile of fluffy Kinsella books. Although I must say that the romance in this one didn't lead the story for me. Yes: the guy she meets sets things in motion for Fixie, but this story is mostly about Fixie getting her priorities straight and claiming her own space. That it's a hunky guy who gets her moving is just a nice little extra in my opinion.

I can recommend this book if you like Kinsella's silliness and don't mind that the romance is understated in this book. I for sure will keep it to reread if I need something light and funny.

Why should you read it:
It's a fun Contemporary read.