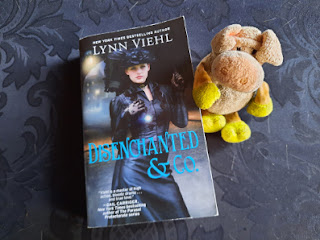 Disenchanted & Co. (Disenchanted & Co. #1)
by Lynn Viehl
What is it about:
In the Provincial Union of Victoriana, a steampunk America that lost the Revolutionary War, Charmian “Kit” Kittredge makes her living investigating crimes of magic. While Kit tries to avoid the nobs of high society, she follows mysteries wherever they lead.
Unlike most folks, Kit doesn’t believe in magic, but she can’t refuse to help Lady Diana Walsh, who claims a curse is viciously wounding her while she sleeps. As Kit investigates the Walsh family, she becomes convinced that the attacks are part of a more ominous plot—one that may involve the lady’s obnoxious husband.
Sleuthing in the city of Rumsen is difficult enough, but soon Kit must also skirt the unwanted attentions of a nefarious deathmage and the unwelcome scrutiny of the police chief inspector. Unwilling to surrender to either man’s passion for her, Kit struggles to remain independent as she draws closer to the heart of the mystery. For the truth promises to ruin her life—and turn Rumsen into a supernatural battleground from which no one will escape alive.
What did I think of it:
This is a very enjoyable Steampunk adventure.
I will say that for someone who makes her money by investigating things, Kit is as dense as they come at times. Some things were so obvious that they could only have been clearer if someone would have spelled it out to her, and still she was oblivious.
Apart from that small annoyance I had fun with this book. The worldbuilding was intriguing, and there were several really cool characters. I was eager to find out if and when Kit would catch on and how she would solve the problems thrown her way. Extra bonus points for the author for not using the typical "Steampunk speech" some authors seem to think is needed to write Steampunk stories.
The conclusion was not how I'd have wanted it to be, but I was entertained enough not to mind too much. All in all a fun read, and I'll most certainly read book 2.
Why should you read it:
It's a very enjoyable Steampunk read.
buy from Amazon
Posted by Sullivan McPig at 13:00