Forsaken by the Others - Early book Review 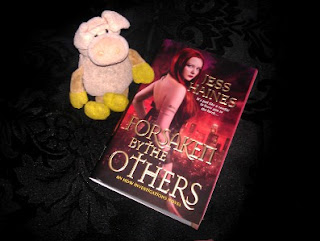 Forsaken by the Others (H&W Investigations #5)
by Jess Haines

What is it about:
The Others–vampires, werewolves, things that go chomp in the night–don’t just live in nightmares anymore. They’ve joined with the mortal world. And for private investigator Shiarra Waynest, that means mayhem…

Have a one night stand with a vampire, and you can end up paying for it for eternity. P.I. Shiarra Waynest, an expert on the Others, knows that better than most. Yet here she is, waking up beside charismatic vamp Alec Royce with an aching head…and neck. Luckily, Shia has the perfect excuse for getting out of town–namely, a couple of irate East Coast werewolf packs who’d like to turn her into a chew toy.

On Royce’s suggestion, Shia temporarily relocates to Los Angeles. But something is rotten–literally–in the state of California, where local vampires are being attacked by zombies. Who could be powerful enough to control them–and reckless enough to target the immortal? Following the trail will lead Shia to a terrifying truth, and to an ancient enemy with a personal grudge…

What did I think of it:
I will confess I have been looking forward to this book for a long time, because I knew there would be zombies in it! So I was very happy when I received an ARC from Jess Haines.

And the zombies are awesome!

Not just the zombies either btw, the whole book is a winner.

The story is cool and action-packed. After a slow, but enjoyable start that had Voodoo Bride drooling (Royce!) the story gathered speed and from there on out it was a cool thrillride. Shia manages to find trouble without even looking for it and soon she has to use all her wit to survive.

There are conspiracies, danger at every corner, cool new characters and zombies galore. I especially liked the vampire Jimmy Thrane and his coterie/gang of misfit vampires. I hope they'll be in future books as well.

The ending was even more shocking and frustrating than the ending of book 3 (Deceived by the Others) in my opinion and I'm already yearning for book six to find out what happens next.

If you haven't started this series yet: you should. This is a great and fun series with lots of intense action and cool characters.

Why should you read it:
It's an awesome Urban Fantasy read with zombies.

I so want to read this one! Glad you love the series Voodoo Bride :)

Voodoo Bride is a big fan of Royce, sexiest vampire ever in her opinion.

Ok, I'm surprised I haven't read this yet. I love vampires and vampire books, as well as the other PNR type characters. Definitely gonna have to get this one.

I saw your link on the Herding cats & Burning Soup fb page.

Heartses! Thanks for the great review!

yay this book was really good!