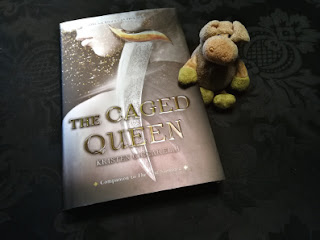 What is it about:
Roa and her sister Essie were born with a bond so strong that it forged them together forever. It was a magic they cherished - until the terrible day Essie died and her soul was trapped in this world.

Dax, the heir to the throne of Firgaard, was responsible. Roa swore she would never forgive him - yet when he came begging for her help to dethrone his cruel father, Roa made him a deal. She'd give him the army he needed if he made her queen.

Now, even after everything she has sacrificed, Dax's promises go unfulfilled. Roa's people still suffer.

Then a chance to right every wrong arises - an opportunity for Roa to rid herself of this enemy king and rescue her beloved sister. During the Relinquishing, when the spirits of the dead are said to return, Roa can reclaim her sister for good.

All she has to do is kill the king...

What did I think of it:
I loved The Last Namsara, so had to get my trotters on this companion novel.

And this is yet another great read.

I love Ciccarelli's writing and her worldbuilding. The people of the scrublands and their customs sounded very intriguing and interesting. And I fell in love with Roa immediately. She is fierce, passionate, and willing to do anything for those she loves. If she has flaws, it's that she is stubborn and unable to communicate when needed. If only she would sit down and talk with the people close to her, it would have made life a lot easier for her.

Dax however is being a total shit. If I had been Roa, I'd have killed him or done worse to him long before the Relinquishing. If not for the glimpses of their shared past at the start of chapters, and his actions in The Last Namsara I'd have wanted him dead. But Ciccarelli manages to create a balance where I was eager to find out what was going on with him, and if he'd shape up before Roa set her plans in motion. And if he did: what would Roa do? Still go through with her plan or find another way to save her sister?

I will confess there were events I saw coming, others were a surprise. I rooted for Roa, wanted to shake sense in her, was angry with and at her, and couldn't put the book down. I still love The Last Namsara best, but this book is a great addition to this series. You bet I'll get my trotters on the third book once available.