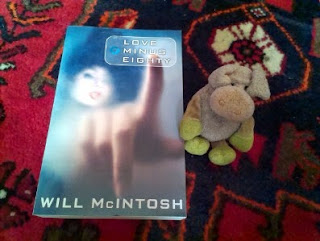 Love Minus Eighty
by Will McIntosh

What is it about:
Years in the future, dead women in cryogenic dating farms await rich, lonely suitors to resurrect them and take them home.

There's Rob, who accidentally kills a jogger, then sells everything to visit her, seeking her forgiveness but instead falling in love. Veronika, a socially-awkward dating coach, finds herself responsible for the happiness of a man whose life she saved against his will. And Mira, a gay woman accidentally placed in the heterosexual dating center near its inception, desperately seeks a way to reunite with her frozen partner as the centuries pass.

The future world McIntosh describes feels cold and impersonal. People interact mostly through screens, with help of coaches. Dead women, who have been frozen after death, have to try to seduce rich men with lurid promises so they can get resurrected. Still this story breathes warmth and love. It shows that human interaction and friendship is important to stay human yourself.

The stories of Rob and Veronika are the most worked out, while Mira's story seems almost an afterthought at times. Added only to show the horrors of the frozen women, who have to date and catch a husband even in death. Still her story might have been small, but it touched me the most. Rob's quest to make enough money to keep visiting the woman he accident killed was touching as well, but it felt more like a faerie tale at times, where Mira's struggles felt more real to me.

I also really enjoyed Veronika's story line. She's the character in this book that grows the most as a person. Starting out as insecure, with an impossible crush, but blooming into the person she is meant to be.

All in all this is a story about friendship, love, and fighting for what you believe in. I will most certainly put this book on my keeper shelves, and I will investigate what other books McIntosh has written.

Why should you read it:
It's a beautiful and though provoking read.

Email ThisBlogThis!Share to TwitterShare to FacebookShare to Pinterest
Labels: book, review, Will McIntosh