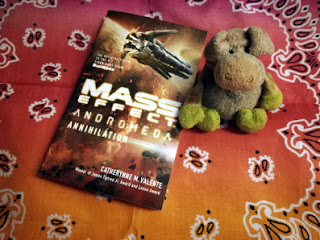 What is it about:
An official tie-in to the hit video game Mass Effect: Andromeda.

As the Quarian ark Keelah Si'yah sails toward the Andromeda galaxy, it carries 20,000 colonists from several races including the Drell, Elcor, and Batarians. Along the way a routine check reveals that many of the Drell colonists have died in their cryopods, and a pathogen is discovered. It begins to jump species, then the ship's tech begins to fail, making it clear that this is no accident. It's murder, and the perpetrator is still on board.

The ship's systems rapidly degrade, and panic spreads among the colonists. To make matters worse, the virus yields a terrible swelling of the brain that causes madness, hallucinations, and leads to violence. If the ship's crew can't restore their technology and find a cure, the Keelah Si'yah will never make it to the Nexus.

What did I think of it:
I loved Mass Effect Andromeda and for a long time after finishing the game I held hope there would be DLCs. One of those could have been about the Quarian ark, as at the end of the game it is revealed the Keelah Si'yah is in trouble. Alas: EA decided to pull the plug and I didn't get a Quarian ark DLC. So you bet I preordered this book as soon as I knew it was about the Keelah Si'yah.

And this is a really great book. Even better than Nexus Uprising.

The Quarian ark is travelling through space, all its occupants in cryosleep when three sleepwalkers (specialists who wake up once in awhile to check the ship) are woken up off schedule, because the ship detects an anomaly. The three of them soon realize there is trouble and they need to act fast or the whole ark may be lost.

The three specialists are the viewpoint characters in this book, and I especially loved Yorrik: an Elcor doctor who dreams of being an actor once the ark reaches Andromeda. He has to work on finding a cure together with a Hanar who doesn't like him. Yorrik's chapters were my favorite, and I rooted for him to save the day and realize his dreams.

Then there is Senn, a Quarian who loves machines and VI's. He's not your typical Quarian, and I very much liked him as well. He is levelheaded, and open to change and creative solutions.

The last viewpoint character was a Drell detective and she was the least interesting to me. Most probably because she keeps lying and adapting herself according to who she is talking to, so you don't really get to know her. Luckily the characters she gets teamed up with - a Batarian and a Volus - are interesting.

The story is suspenseful and tense. I couldn't put the book down, I had to know if they could catch the culprit and save the ark. There were some really heartbreaking moments, and the ending was bittersweet. If it was impossible to get this story as a DLC, this book is certainly the next best thing. I might need to do another playthrough of the game soon.

Why should you read it:
It is a suspenseful and beautiful SF read