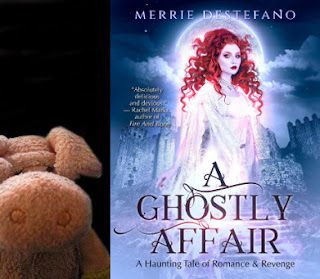 A Ghostly Affair
by Merrie Destefano

What is it about:
A GHOSTLY AFFAIR: One haunting tale of romance and revenge, told in four short stories.

ONE: A Dark And Twisted Heart
Katrina is so beautiful, she's almost perfect. She only has two flaws. She's possessive. And she's dead.

TWO: A Long and Wild Hunt
Trapped in a cursed forest with the boyfriend who murdered her wasn't how Katrina planned to spend the Afterlife. She might be a ghoul and hell-bent on revenge, but that doesn't mean she has to be miserable. Or does it?

THREE: A Dark And Wicked Night
One wicked night. One blast from a silver horn. Then the Wild Hunt begins as the Faery King summons all the dead to rise from their graves and join him.

FOUR: A Long And Wretched Curse
Girlfriend. Victim. Ghost. Katrina has been all of these things. Now, the Faery King wants her to become his Queen. But she’s seen what the King does when a ghost disobeys him. He turns the ghost to ash and erases him from existence.

For fans of AND I DARKEN by Kiersten White and MISS PEREGRINE'S HOME FOR PECULIAR CHILDREN by Ransom Riggs.

Please note, this set was previously published as The Dark Heart Boxed Set.

This is a great read.

Destefano knows just how to create a creepy, dark atmosphere to go along with this bittersweet tale of death, love, and redemption. The first book is told from the viewpoint of William. He has dark secrets he is hiding, but it seems his murdered love Katrina won't stay silent and is set on teaching him a lesson. This book is haunting and disturbing in a good way.

From the second book onward we see the story through Katrina's eyes. She is brave, stubborn, and emotional. As she discovers she and the two people closest to her are trapped in a cursed faerie forest, she starts to plot a way out. The tone of the story changes a bit, from disturbing to spooky. I was eager to find out if Katrina would succeed to be happy in the afterlife she ended up in. Her impulsive decisions might not always lead to the best outcome.

All in all this is a wonderfully atmospheric bundle that mixes ghosts and faeries, making this a great read for a dark autumn night. You might reconsider taking a walk through the woods late at night after reading this though.

Why should you read it:
It's a beautiful, atmospheric read.