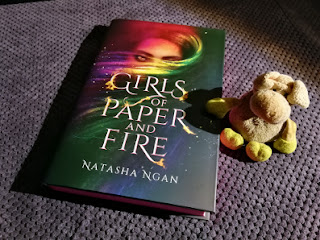 What is it about:
Each year, eight beautiful girls are chosen as Paper Girls to serve the king. It's the highest honor they could hope for...and the most cruel.

But this year, there's a ninth girl. And instead of paper, she's made of fire.

In this lush fantasy, Lei is a member of the Paper caste, the lowest and most oppressed class in Ikhara. She lives in a remote village with her father, where the decade-old trauma of watching her mother snatched by royal guards still haunts her. Now, the guards are back, and this time it's Lei they're after--the girl whose golden eyes have piqued the king's interest.

Over weeks of training in the opulent but stifling palace, Lei and eight other girls learn the skills and charm that befit being a king's consort. But Lei isn't content to watch her fate consume her. Instead, she does the unthinkable--she falls in love. Her forbidden romance becomes enmeshed with an explosive plot that threatens the very foundation of Ikhara, and Lei, still the wide-eyed country girl at heart, must decide just how far she's willing to go for justice and revenge.

What did I think of it:
*spoiler about love interest*

So I'm going to give a spoiler about the love interest, because it was what made me interested in this book. Lei falls in love with one of the other Paper Girls. I loved how this romance unfolded, and rooted for both of them to be able to be together, and to escape their gilded prison and the king.

I also really loved the interaction between all the girls. There is friendship, jealousy, competition. I liked how Ngan showed the different ways people can react to the same situation depending on background, character, and things like that.

The setting and the worldbuilding was beautiful. It is inspired by Eastern cultures and Ngan's writing painted a clear picture of the opulence of the palace, which starkly contrasted with the small village Lei grew up in.

I was a little annoyed by Lei being special as she isn't part of the normal selection, but gets added to the girls at the last minute. For a while it even looked like she was one of those special YA heroines who are so special that they miraculously manage to escape the horrors that happen to all the other girls around them, but luckily Ngan didn't make that mistake.

The violence and sexual abuse was handled well I think. There were some brutal scenes, but the abuse was mostly kept of page and mentioned instead of shown. Still I can advice to stay clear of this book if you're easily triggered.

All in all I loved this book and was hooked from the start to the end. The way the end was written makes that it can be read as a standalone, but it also makes me eager for the sequel. You bet I'll keep an eye out.

Why should you read it:
It's a beautiful (YA) Fantasy read.