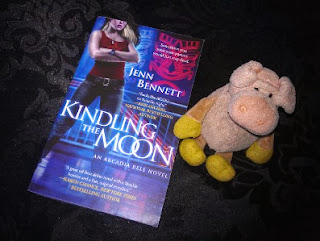 What is it about:
Being the spawn of two infamous occultists (and alleged murderers) isn’t easy, but freewheeling magician Arcadia “Cady” Bell knows how to make the best of a crummy situation. After hiding out for seven years, she’s carved an incognito niche for herself slinging drinks at the demon-friendly Tambuku Tiki Lounge.

But she receives an ultimatum when unexpected surveillance footage of her notorious parents surfaces: either prove their innocence or surrender herself. Unfortunately, the only witness to the crimes was an elusive Æthyric demon, and Cady has no idea how to find it. She teams up with Lon Butler, an enigmatic demonologist with a special talent for sexual spells and an arcane library of priceless stolen grimoires. Their research soon escalates into a storm of conflict involving missing police evidence, the decadent Hellfire Club, a ruthless bounty hunter, and a powerful occult society that operates way outside the law. If Cady can’t clear her family name soon, she’ll be forced to sacrifice her own life . . . and no amount of running will save her this time.

What did I think of it:
In an attempt to at least get one TBR-orphan read this month I picked up Kindling the Moon from my tbr-pile.

And now I'm wondering why it took my so long to get to reading it!

This is such a cool read.

I fell in love with the setting and with Arcadia from the start. The world building is fun and original. And then Lon entered the stage and I was completely sold. Lon is gruff, grumpy, but strangely likeable. I loved getting to know him.

I also love how Lon, as the love interest, has a son who is also part of the story. I usually get annoyed by lead characters or love interests with children/wards, because those children are often only there for being cute or showing the vulnerable/softer side of the parent/sibling. Not so with Jupe. He's past the age to play the cute card. instead he's a teenager and a handful. I really like how he got included in the story and I'm actually hoping to see lots more of him in future books.

The action is almost non-stop and I almost couldn't put this book down. I had to keep reading to find out what happened next. All in all I finished this book in two days and that's only because I had previous engagements that I couldn't cancel in favor of reading.

So you can bet on it that I'll be getting my trotters on book 2 as soon as possible and that it won't end up as a TBR-Orphan.

Why should you read it:
It's an awesome UF read with magicians and demons.