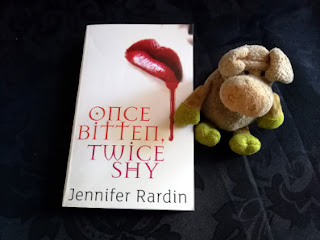 What is it about:
I'm Jaz Parks. My boss is Vayl, born in Romania in 1744. Died there too, at the hand of his vampire wife, Liliana. But that's ancient history. For the moment Vayl works for the C.I.A. doing what he does best--assassination. And I help. You could say I'm an Assistant Assassin. But then I'd have to kick your ass.

Our current assignment seemed easy. Get close to a Miami plastic surgeon named Assan, a charmer with ties to terrorism that run deeper than a buried body. Find out what he's meeting with that can help him and his comrades bring America to her knees. And then close his beady little eyes forever. Why is it that nothing's ever as easy as it seems?

What did I think of it:
I've read this book before in 2011, but couldn't remember a thing! Usually this is a bad sign. My brain has the habit of blocking books and movies I hated. Still, my review from back then didn't sound ranty, and I even stated being willing to try a second book in the series. As I could get the first 5 book in this series for a steal at the charity shop I decided to give this series another chance and reread this book.

And this is an enjoyable read. My brain must have decided to also forget reasonably nice reads.

The book starts with Jaz being told she's going to work with Vayl, and then immediately switches to six month later. I will confess I wish I got the story of their first six month working together as well. Still I really like Jaz and Vayl. The tension between them is interesting and promising.

The story itself is suspenseful, but at times a bit chaotic. I'm not sure if it's the writing or that the plot might be too convoluted. A small annoyance was the fact that Jaz as narrator didn't reveal information she had, but kept eluding to it: "I haven't been the same since.... THE THING!!!" Ok, I'm paraphrasing here, but mention like that were many before we finally were informed about what happened in the past.

That aside the story was entertaining enough that I'm curious about the next book, and want to see how the relationship between Jaz and Vayl will develop. I'll be picking up book two one of these days.

Why should you read it:
It's a nice Urban Fantasy read