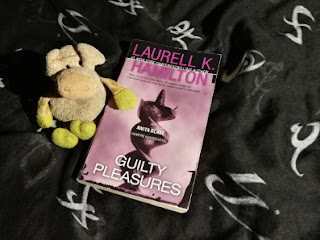 What is it about:
Anita Blake is small, dark, and dangerous. Her turf is the city of St. Louis. Her job: re-animating the dead and killing the undead who take things too far. But when the city’s most powerful vampire asks her to solve a series of vicious slayings, Anita must confront her greatest fear—her undeniable attraction to master vampire Jean-Claude, one of the creatures she is sworn to destroy...

What did I think of it:
Another book I read back in 2011, but where the story was deleted by my brain. As a friend gave me 12 books in this series I decided to do a reread of this book.

And this first book is... problematic.

The world building, setting, and Anita's profession are promising, but not fully realized in this first book. And once again this is a first book where I felt that it started at the wrong place. There seemed to be a history and connection between Anita and Jean-Claude that I apparently just had to fill in myself. It also felt like there were important things missing from the story at times.

Still I was entertained enough to keep reading. Anita wasn't making it easy though: she's a bigot and quick to judge those who are different. Luckily I was told by several people that the books get better, and there is significant character development ahead, so I kept reading and only grumbled softly at Anita.

Overall this a nice read. I'll pick up the next book soon to see if Anita will indeed shape up, and to read more about Jean-Claude, because he seems interesting.

Why should you read it:
It's a nice Urban Fantasy read.