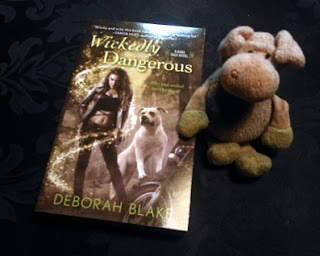 What is it about:
Known as the wicked witch of Russian fairy tales, Baba Yaga is not one woman, but rather a title carried by a chosen few. They keep the balance of nature and guard the borders of our world, but don’t make the mistake of crossing one of them…

Older than she looks and powerful beyond measure, Barbara Yager no longer has much in common with the mortal life she left behind long ago. Posing as an herbalist and researcher, she travels the country with her faithful (mostly) dragon-turned-dog in an enchanted Airstream, fulfilling her duties as a Baba Yaga and avoiding any possibility of human attachment.

But when she is summoned to find a missing child, Barbara suddenly finds herself caught up in a web of deceit and an unexpected attraction to the charming but frustrating Sheriff Liam McClellan.

Now, as Barbara fights both human enemies and Otherworld creatures to save the lives of three innocent children, she discovers that her most difficult battle may be with her own heart...

What did I think of it:
This is a fun book.

I really liked the concept of Baba Yaga being a job title instead of being just one person. Barbara is and intriguing character, and I liked her and her otherworldly friends.

The story was fun although I thought there could have been a bit more obstructions along the way. But even though it didn't seem to take any real effort, I very much enjoyed the read.

I thought when I started on the book that the whole series would have the same lead character, but it turned out that each book has another lead character, so there are no big cliffhangers to frustrate you at the end of the book.

All in all a fast and fun read that falls somewhere between Urban Fantasy and Paranormal Romance.

Why should you read it:
It's a very enjoyable UF/PNR read