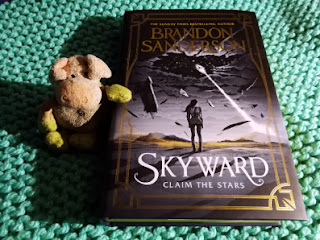 What is it about:
Spensa's world has been under attack for hundreds of years. An alien race called the Krell leads onslaught after onslaught from the sky in a never-ending campaign to destroy humankind. Humanity's only defense is to take to their ships and combat the Krell. Pilots are the heroes of what's left of the human race.

Becoming a pilot has always been Spensa's dream. Since she was a little girl, she has imagined soaring above the earth and proving her bravery. But her fate is intertwined with that of her father--a pilot himself who was killed years ago when he abruptly deserted his team, leaving Spensa's chances of attending Flight School at slim to none.

No one will let Spensa forget what her father did, but she is determined to fly. And the Krell just made that a possibility. They've doubled their fleet, which will make Spensa's world twice as deadly . . . but just might take her skyward.

What did I think of it:
This book was even better than I hoped.

It's not mentioned in the above blurb, but other blurbs, like the one on Goodreads mention Spensa finds a spaceship that is sentient. People talked so much about the spaceship that I expected that it would be the focus of the story. But it is not, luckily enough.

Yes, the spaceship certainly plays a big role, but Spensa's attempts to become a pilot, and to discover the truth about her father and the Krell are just as important if not even more so. All these storylines together, the worldbuilding, and the characters grabbed me from the start, and I read the book in a single day. I just couldn't put it down.

I liked Spensa, even though she is reckless and rash at times. She is passionate, stubborn, and loyal. I rooted for her to succeed. There were some really interesting and cool other characters as well, but Sanderson isn't afraid to sacrifice characters for the good of the story, so I lost a few of my favorites. There is the start of something that might become a romance, I'm curious to see how it will develop.

All in all this is a really cool SciFi read, and you ca bet I'll get my greedy trotters on the next book once it releases. In the mean time I'll have to investigate Sanderson's Fantasy books.

Why should you read it:
It's an awesome YA SF read.