I need to read more books in this series 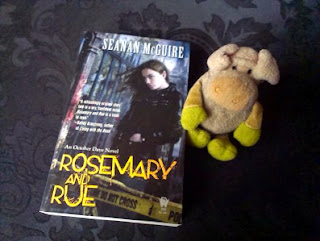 What is it about:
October "Toby" Daye, a changeling who is half human and half fae, has been an outsider from birth. After getting burned by both sides of her heritage, Toby has denied the Faerie world, retreating to a "normal" life. Unfortunately for her, the Faerie world has other ideas...

The murder of Countess Evening Winterrose pulls Toby back into the fae world. Unable to resist Evening's dying curse, which binds her to investigate, Toby must resume her former position as knight errant and renew old alliances. As she steps back into fae society, dealing with a cast of characters not entirely good or evil, she realizes that more than her own life will be forfeited if she cannot find Evening's killer.

What did I think of it:
I really liked McGuire's Discount Armageddon, but her book Feed (written under the name Myra Grant) was boring imo, so it was a DNF for me. That's the reason I was hesitant to start on this series, and this book stayed in my TBR pile for a long, long time before I dared pick it up.

This turned out to be a cool read though!

I loved the world building and the faerie world. McGuire uses a lot of old faerie mythology, but weaves it into the story so it feels like it belongs.

October had to grow on me (she's a bit too closed off and self reliant when she should know she should ask for help), but some of the other characters I was intrigued by from the start. Especially Tybalt, king of the Cat Faeries sounds like a character I want to read lots more about.

There were two possible love interests, both not to my tastes and with their own set of troubles, but luckily the romance isn't too present in this book, so it didn't spoil the story for me. although I am wary for how things might develop later on in this series.

The situation Toby is in felt desperate at times, and I had my doubts if things could turn out right. It did keep me reading though, to find out.

All in all I enjoyed this book much more than I ever expected, and I will pick up the next book in this series soon. I will most probably also dig up the second book in McGuire's InCryptid series as my next TBR Orphan.

Why should you read it:
It's a cool Urbab Fantasy read.