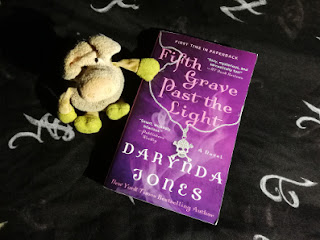 Fifth Grave Past the Light (Charley Davidson #5)
by Darynda Jones

What is it about:
Charley Davidson isn't your everyday, run-of-the-mill grim reaper. She's more of a paranormal private eye/grim reaper extraordinaire. However, she gets sidetracked when the sexy, sultry son of Satan, Reyes Farrow, moves in next door. To further complicate matters, Reyes is her main suspect in an arson case. Charley has vowed to stay away from him until she can find out the truth...but then dead women start appearing in her apartment, one after another, each lost, confused, and terrified beyond reason. When it becomes apparent that her own sister, Gemma is the serial killer's next target, Charley has no choice but to ask for Reyes's help. Arsonist or not, he's the one man alive who could protect Gemma no matter who or what came at her. But he wants something in return. Charley. All of her, body and soul. And to keep her sister safe, it is a price she is willing to pay.

What did I think of it:
This is yet another fun addition to the series were humor and suspense mix perfectly.

I will confess that Cookie, Charley's assistant is my favorite character, and in this book she shines once again. Charley is on game once again as well, and I was rooting for her to discover what was going on and to solve the case.

Even though Charley and Reyes are getting more intimate it's clear they still aren't honest enough towards each other and I predict lots of relationship trouble yet to come. Other characters are vying for stirring up trouble and danger as well.

There was one event where I hope Charley will do everything in her power to set things right in the next book, because if she doesn't my respect for her will dwindle.

Overall this is a very enjoyable and fun book though, and I'll pick up the next book soon.

Why should you read it:
It's a fun and very entertaining UF read.