To Kill a Kingdom - Book Review 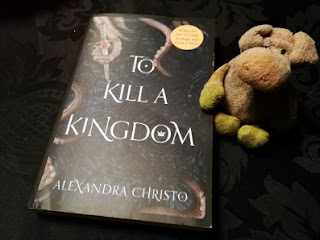 To Kill a Kingdom
by Alexandra Christo

What is it about:
Princess Lira is siren royalty and the most lethal of them all. With the hearts of seventeen princes in her collection, she is revered across the sea. Until a twist of fate forces her to kill one of her own. To punish her daughter, the Sea Queen transforms Lira into the one thing they loathe most—a human. Robbed of her song, Lira has until the winter solstice to deliver Prince Elian’s heart to the Sea Queen or remain a human forever.

The ocean is the only place Prince Elian calls home, even though he is heir to the most powerful kingdom in the world. Hunting sirens is more than an unsavory hobby—it’s his calling. When he rescues a drowning woman in the ocean, she’s more than what she appears. She promises to help him find the key to destroying all of sirenkind for good—But can he trust her? And just how many deals will Elian have to barter to eliminate mankind’s greatest enemy?

What did I think of it:
You'd think that I'd have figured out before starting on this book that this is a re-imagining of The Little Mermaid...

Maybe it's good that I didn't figure it out though, because even though I love the original fairytale, I despise what Disney did with it. So had I known, I'd probably avoided this book in fear the author based it on the Disney version.

This is such a beautiful story!

I loved Lira. She acts ruthless, a product of the world she grew up in, but at heart she is passionate and caring for those she loves. It is this love that gets her in trouble. Helping her cousin she breaks a rule that makes that her cruel mother punishes her.

Elian was a bit harder to like at first. Although I could understand he wants his own life, I also thought he was a bit selfish. Luckily he soon grew on me and I could root for him as well as for Lira.

I love what Christo did with this story. Yes, it's based on The Little Mermaid, but Christo made the story her own and gave new emotion and suspense to this tale. I was on the edge of my seat and had to keep reading to see where the story would lead and if Lira would get a happy end or if she was doomed like the mermaid in Anderson's tale.

All in all this was a really beautiful read and even better than I expected going in. You bet this book goes on my keeper shelves and that I'll keep an eye on other books by Christo.

Why should you read it:
It's a beautiful and suspenseful YA Fantasy read.