To Ruin a Gentleman - Book Review by Voodoo Bride 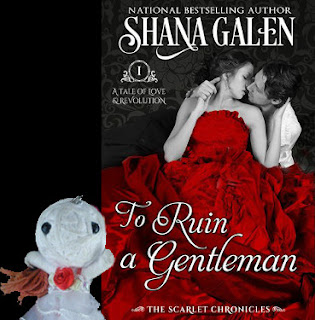 To Ruin a Gentleman (The Scarlet Chronicles #1)
by Shana Galen

What is it about:
The true story of the Scarlet Pimpernel . . .
Angelette, the recently widowed Comtesse d'Avignon, only invited Viscount Daventry to her country house party as a favor to her sister. When the handsome British lord arrives—two days late—he's full of unnerving tales of unrest and violence in Paris. Angelette assumes it's all exaggeration...until her chateau is attacked and her life threatened. Daventry rescues her, and the two are forced to run for their lives. But when danger closes in, will the viscount stand at her side or save himself?

Is not the one you've been told.
Hugh Daventry visits France frequently to import wine for the family business. On his way out of the country, he stops at the comtesse's house party out of obligation. But after meeting the raven-haired beauty, he tries to persuade her to leave France with him. When the peasants attack, he realizes he's already too late, and now he must protect Angelette, whose sharp tongue is far from angelic. Too soon the couple is caught up in the rising revolution, dodging bloodthirsty mobs, hiding from soldiers, and embroiled in the attack of the Bastille. Hugh wants nothing but to leave tumultuous France for the calm of England. He knows Angelette is intelligent and resourceful—a survivor. But can Hugh survive without her?

What did Voodoo Bride think of it:
This is a delicious and suspenseful novella.

Set at the start of the French Revolution this novella shows a bit about the tumult and riots that take the country. Hugh and Angelette have to flee from the angry revolutionaries to stay alive and fall in love in the mean time.

This novella is the start of a series and it manages to deliver both in the whirlwind romance between Hugh and Angelette and in making you eager for more in this series. I couldn't put this book down. I had to see how the two of them would make it out alive and I wanted to see them give in to the attraction that sparked between them from the start.

I liked that Angelette is strong and independent. She might have been surprised by the outbreak of the revolution, but that doesn't mean she will just lay down and surrender. Hugh wants nothing more than to return to his own country, but can he leave Angelette behind?

All in all a satisfying read. I'll be sure to get hold of the next book in this series.

Why should you read it:
It's a delicious Historical Romance.