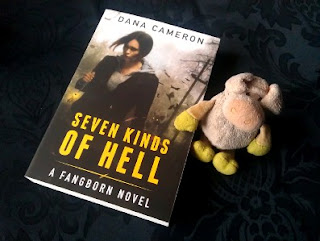 Seven Kinds of Hell (Fangborn #1)
by Dana CameronWhat is it about:When archaeologist Zoe Miller's cousin is abducted by a vicious Russian kidnapper, she must come to grips with a haunting secret. Unknown to even her closest friends, Zoe is not entirely human. She's a werewolf and a daughter of the "Fangborn," a hidden race of werewolves, vampires, and oracles.

Zoe's attempt to rescue her cousin leads her on a quest for artifacts—including Pandora's Box, an object of world-ending power. With the fate of humanity in the balance, Zoe will be forced to renew family ties and pit her own supernatural abilities against a dark and nefarious foe.

At once captivation, deftly worded, and character-rich Seven Kinds of Hell expands vampire legend and werewolf noir in both intensity and charismatic bite.What did I think of it:I will confess I totally bought this book for the gorgeous cover, but luckily it turned out to be a pretty cool read as well.From the first chapter I was intrigued by Zoe and her life. She grew up outside of the Fangborn community and has lots to learn about herself and others like her. Even though this trope has been used lots of times before, Cameron manages to make it work and she had me hooked from the start.The story is action-packed and leads from America to London, Berlin and even further. I really liked the mythology that was used and loved how Cameron weaved this mythology into the story in a natural way.I didn't really get into the romance storyline, I will admit. I think it's because the love interest is introduced after I already started to like another male character and I was disappointed I once again rooted for the wrong guy. But that's very personal, so I think other readers won't have the same problem.Romance aside I loved this story and I am more than curious to see what happens next for Zoe. I will certainly keep an eye out for the next book.Why should you read it:

It's a cool Urban Fantasy read.