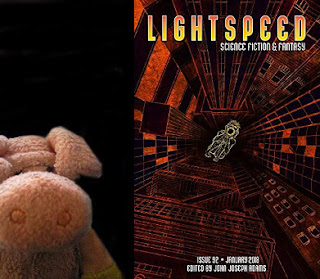 The Court Magician
by Sarah Pinsker
What is it about:
A boy gets the chance to become the court magician, but what is he willing to sacrifice for that position and the knowledge it brings?
What did I think of it:
I read this story in 2019 when I was reading for the Hugo's of that year. Back then it was just a blip on my radar among the other short stories, novelettes, and novellas I read. After reading Two Truths and a Lie, and And Then There Were (N-One) I decided to give it another try.
And this story definitely grows on you.
I was invested in the boy and the choices he makes, as well as in the unnamed person who is telling the story. I was lured into this dark story and wanted to tell the boy to make different choices, to think!
All in all a dark and clever story. I totally picked up one of Sarah Pinsker's novels after finishing this.
Why should you read it:
It's a clever if dark short story
buy from Amazon
Posted by Sullivan McPig at 13:00