All Together Now: A Zombie Story - Book Review 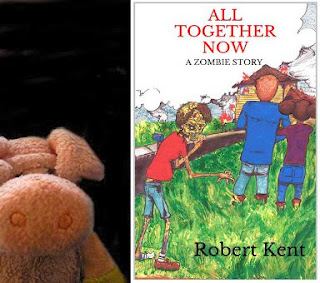 All Together Now: A Zombie Story
by Robert Kent

What is it about:
Fifteen-year-old Ricky Genero is writing a journal of the zombie apocalypse. His high school has burned to the ground, his friends are all either dead or shambling corpses roaming the earth in search of human flesh, and his best friend died saving his six-year-old brother Chuck from a zombie horde. When Chuck is bitten and infected with the zombie virus, Ricky must travel among the walking dead in search of a cure.

This YOUNG ADULT novel is mean and nasty and intended for a mature audience. It is absolutely not appropriate for younger readers. All Together Now: A Zombie Story is a gruesome, repugnant tale featuring horrific acts of violence sure to warp young minds.

What did I think of it:
This is a cool zombie read.

I will confess I had a bit of a problem with Ricky at times. He's a typical average teenager, with lots of prejudices. The way he described some of the other people in this story made me want to push him in front of a horde of zombies at times.

But luckily the story is cool enough to not get too annoyed by Ricky. There's lots of zombie mayhem and other intense situations.

The reason for the zombie outbreak is original and believable. Kent also did a great job with the pacing and the way people react at first.

Kent doesn't pull any punches. This is a violent story, that not only shows the zombie carnage, but also how humans can be just as nasty and dangerous as zombies, if not more so.

I really liked the ending of this story. I won't spoil too much, but it was both a clever and a cool ending.

All in all I very much enjoyed this story and I can advice it to anyone who doesn't shy away from zombie mayhem. I will keep n eye out for what else Kent will write.

Why should you read it:
It's a cool Zombie YA full of zombie mayhem.