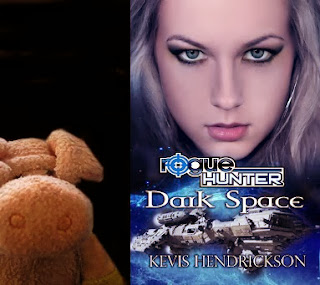 What is it about:
TRAPPED AND HUNTED!

Shortly after her trial on New Venus, Zyra Zanr is captured by a team of rival bounty hunters and brought aboard their ship, the Lilith. They intend to take her to the planet Sojo, home of a powerful crime boss who nurses a grievance against her. Zyra fears for her life, knowing death awaits her at the end of the journey. Her captors' seething hatred of her leads to Zyra's horrifying torture.

Drugged, beaten, and near death, Zyra escapes her cell and is pursued. The enemy will stop at nothing to recapture her. Enraged by the abuse she has suffered, Zyra decides to turn the table on the Lilith's crew and show them why she is the most feared bounty hunter in the galaxy.

What did I think of it:
This is a cool read.

The previous book in this series was an enjoyable read, but had some awkward writing from time to time. Rogue Hunter: Dark Space doesn't have that problem. It's pleasantly written, and the story flows from action to dialogue and back without any hiccups.

The story itself is full of action and suspense. Zyra is trapped on a space ship, and is being hunted, or is she the one hunting? The tables get turned on both Zyra and her captors from time to time, keeping you guessing who will come out the victor.

I liked you got to know the crew of the Lilith, so you can relate to both them and to Zyra, making it hard to know who to root for at times. I must say it reminded me of the Alien movies a bit. The way death could lurk at every corner. I think this story would work very well as a movie itself as well.

The story ends with another cliffhanger, and I must say i'm very curious what will be next. All in all this is a very entertaining SciFi adventure and I'm keeping an eye out for what else Hendrickson will write in this series.

Why should you read it:
It's an enjoyable and cool SciFi read.

It sounds like something I would really enjoy, except for the torture. How detailed is that?

It's a tough scene to read. But I knew that writing it, so I don't torture the reader too by dragging it out. Zyra is the ultimate female warrior. Her enemies certainly have done a number on her, but they;'ll regret it later. ;)