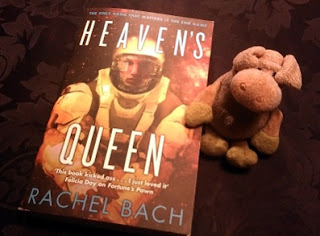 What is it about:
From the moment she took a job on Captain Caldswell's doomed ship, Devi Morris' life has been one disaster after another: government conspiracies, two alien races out for her blood, an incurable virus that's eating her alive.

Now, with the captain missing and everyone -- even her own government -- determined to hunt her down, things are going from bad to impossible. The sensible plan would be to hide and wait for things to blow over, but Devi's never been one to shy from a fight, and she's getting mighty sick of running.

It's time to put this crisis on her terms and do what she knows is right. But with all human life hanging on her actions, the price of taking a stand might be more than she can pay.

What did I think of it:
An awesome conclusion of a really cool trilogy.

The stakes are still high in this last book of the trilogy, and at times I worried about how everything would turn out. Luckily Devi isn't daunted and keeps fighting for her life and for what she thinks is right.

I like that Devi has her own code of honor that she tries not to break, even when it would be so much easier to do so. This time she's not on her own, but has help from Rupert, although Devi's not sure if she can trust him not to betray her again. I loved how Devi doesn't turn into a damsel in distress as soon as she has a man helping her, she can handle herself and stays in charge of her own life.

I was a bit disappointed that some of my favorite characters were shoved out of sight, apart from a minor walk-on part near the end, but there's so much going on that it was probably inevitable. That aside I loved this book. Devi almost doesn't get the time to catch her breath. There's lots of action, danger, and hidden conspiracies.

The ending is very satisfying, although I will confess feeling a bit sad I had to say goodbye to Devi and the cool universe she lives in. I really hope Back will write other books set in this world, because I want more.

Why should you read it:
It's a cool, action-packed SciFi read.