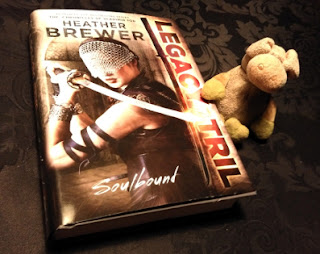 What is it about:
Tril is a world where Barrons and Healers are Bound to each other: Barrons fight and Healers cure their Barrons' wounds in the ongoing war with the evil Graplar King. Seventeen-year-old Kaya was born a Healer, but she wants to fight. In Tril, and at Shadow Academy, where she is sent to learn to heal, it is against Protocol for Healers to fight. So Kaya must learn in secret. Enter two young men: One charming, rule-following Barron who becomes Bound to Kaya and whose life she must protect at all costs. And one with a mysterious past who seems bent on making Kaya's life as difficult as possible. Kaya asks both to train her, but only one will, and the consequences will change their lives forever.

What did I think of it:
I have a taste for Fantasy lately, and this book sounded like it would fit my appetite.

And it's indeed a cool YA Fantasy read.

I really liked the setting and the overall world building. There's some mystery about why the Barron's and the Graplar king are fighting, but that didn't dim my enjoyment in the story. I also really liked Kaya: She is stubborn and doesn't accept the boundaries that are set on her by protocol and tradition. She's willing to fight for her beliefs.

There's lots of action and intrigue (and a love triangle, because this is YA after all), and even though some 'twists' could be seen from miles away I very much enjoyed the story.

There's a bit of a cliffhanger ending, but not so much that I was fretful over the fact that there's no sequel (yet). If there will be a sequel I will most certainly get my trotters on it, but if this is all I get I'm a happy piggy as well.

I might give other books by Brewer a try.

Why should you read it:
It's a very entertaining YA Fantasy read.