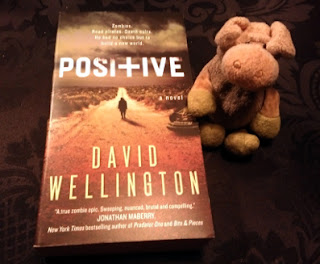 What is it about:
Anyone can be positive...

Years after a plague killed 99 percent of the population, turning them into infectious zombies, Finnegan and his family live in a barricaded New York City. But Finn's sheltered life fractures when his unsuspecting mother falls sick with the zombie disease—latent inside her since before her son's birth.

Finn, too, can be infected. If he remains healthy for the last two years of the potential incubation period, he'll be cleared. Until then, he must be moved to a special facility for positives, segregated to keep the healthy population safe.

Tattooed with a plus sign on his hand that marks him as a positive, Finn is exiled from the city. But when marauders kill the escort sent to transport him, Finn must learn how to survive alone in an eerie, disintegrated landscape. And though the zombies are everywhere, Finn discovers that the real danger is his fellow humans.

What did I think of it:
This is a really cool read.

Finn is totally clueless at times, I must say. If not for being so lucky to run into people who for some reason or other are kind enough to help him, Finn would have been dead within the first few chapters. And don't get me started on how at one point he actually turns into a leader. How!? Why do people follow that naive wimp?

You might think I don't like Finn, but that's not the case. I liked him, I just had wanted to see more personal growth, and to see him turn into someone you would actually want to follow because he gets things done, not because he's lucky.

That aside: I loved the world building, the action, the zombies, and all the different people Finn meets. Wellington paints a future that's grim and gritty, and next to the people who help Finn, he also encounters a lot of nastiness. One of the things I love about Post Apocalyptic fiction is reading how people react to the situation. Dire circumstances drive people to extremes, and that's why stories about zombies and other Post Apocalyptic horrors lend themselves well for showing human nature in all its terrible glory.

All in all I loved this book, flawed lead character and all. It will be placed on my keeper shelves, and I will investigate what other books Wellington has written.

Why should you read it:
It's a gritty and cool Post Apocalyptic read.