Noelle In His Heart - Book Review by Voodoo Bride 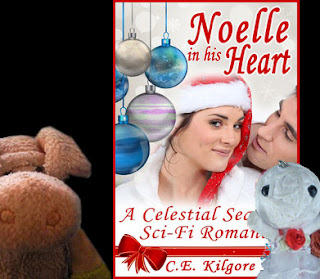 Noelle In His Heart (Celestial Seasons #1)
by C.E. Kilgore

What is it about:
A Christmas romance with a Sci-Fi twist!

Noelle has made the same wish for the past six years to the angel on top of Father Nathan's Christmas Tree. All she wants for Christmas is someone with warm arms to hold her and who can understand that she has commitments - commitments which include the twenty-six children at the foster center she volunteers for.

Stranded on Earth six years ago, Steve and his crewmates have done a pretty good job of secretly finding a place in human society, but it doesn't erase the loneliness that hits hardest around the holidays. He longs for companionship and someone who will understand that his alien heart can love just as deeply.

What did Voodoo Bride think of it:
Yet another really nice read.

The aliens have been on earth for six years so know their way around, and apart from some anatomical differences they're pretty much human.

The romance was sweet and for a novella it had a nice build up. Steve and Noelle were both a bit too perfect at times in my opinion, but it's Christmas so sugar and sweetness are expected.

The other aliens that got stranded on earth with Steve sounded more interesting than Steve I will confess. All of them are set up for a romance of their own, and there are two other books in the series, one a Valentine's romance. I might pick that one up in February.

All in all this is a nice Christmas Romance with a small sprinkling of SF.

Why should you read it:
It's a nice and sweet SF Christmas novella.