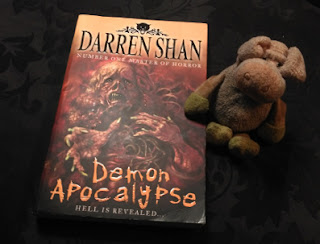 What is it about:
Hell is revealed in the sixth nail-biting, hair-rending, creepy cool episode of the Demonata.Fire! It's all around me, fierce, intense, out of control. I feel the hair on my arms singe and know I have only seconds before I burst into flames. Total panic. There's a horrible shrieking sound, piercing and destructive. My eardrums and eyeballs should burst. "It's hell!" I moan.One boy's life ripped to shreds before his eyes...One wrathful demon master hellbent on revenge...An army of grisly Demonata on the rampage...It's the end of the world as we know it.

What did I think of it:
This is yet another entertaining read.

Shan pulls a stunt he also used in the Cirque du Freak series and which isn't something I particularly like. Still it's not as big a cop out as it is in Cirque du Freak, so I let it pass with only a little bit of grumbling.

All in all an entertaining read with one very interesting development. On to the next book.

Why should you read it:
It's an entertaining read.