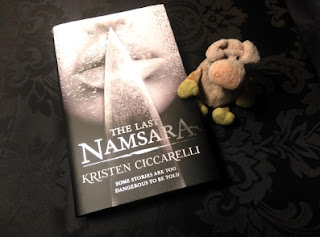 What is it about:
In the beginning, there was the Namsara: the child of sky and spirit, who carried love and laughter wherever he went. But where there is light, there must be darkness—and so there was also the Iskari. The child of blood and moonlight. The destroyer. The death-bringer.

These are the legends that Asha, daughter of the king of Firgaard, has grown up learning in hushed whispers, drawn to the forbidden figures of the past. But it isn’t until she becomes the fiercest, most feared dragon slayer in the land that she takes on the role of the next Iskari - a lonely destiny that leaves her feeling more like a weapon than a girl.

Asha conquers each dragon and brings its head to the king, but no kill can free her from the shackles that await at home: her betrothal to the cruel commandant, a man who holds the truth about her nature in his palm. When she’s offered the chance to gain her freedom in exchange for the life of the most powerful dragon in Firgaard, she finds that there may be more truth to the ancient stories than she ever could have expected. With the help of a secret friend — a slave boy from her betrothed’s household — Asha must shed the layers of her Iskari bondage and open her heart to love, light, and a truth that has been kept from her.

What did I think of it:
Dragons are cool, so I had to get my trotters on this book. It looked like it might be included in the November FairyLoot box, so I ordered that box and hoped I was right, while promising myself to order the book if it wouldn't be in the box.

Luckily it was - with a lovely silver edition of the cover - and even better: it turned out to be a beautiful read!

Asha is so used to being feared and reviled that she has closed her heart and is always on guard. Only when she's with her cousin or her brother she lets her guard down. If it wasn't so clear she loves her cousin and is fiercely protective of her, it would have been easy to dislike Asha. But the small glimpses of the real Asha, buried deep inside the hard outer shell she gave herself made me fall in love.

I was totally invested in her struggle to gain freedom, and could understand why she hesitates to do what's right instead of what's safe for her. She's stubborn and makes mistakes, but out of the wish to gain her freedom instead of just being irrational or unthinking.

As she slowly learns to question what she's taught and she becomes more aware of the world around her, and her own place in the world, she has choices to make. And none of them are easy.

Not just the story is wonderful, but the worldbuilding as well. I loved the dragons! Next to Asha there are a couple of really cool and intriguing characters as well.

This book is readable as a standalone and won't leave you with a cliffhanger. From what I understand the next two books will be companion novels, featuring side characters from this book. I'll keep my out for those for sure!

Why should you read it:
It's a wonderful YA Fantasy with dragons.